Haakon said:
I understand! But a couple of them are just postponed, I believe. At least I think Galdor should probably be cast next season. And there's no reason to rule out casting Penlod at some point.
Click to expand...

Well, in the case of Penlod, I would think that he's a significant character to cast since a) he's Pengolodh's father, and b) Aredhel knows him well enough to trust him with her command. For Bregolas, I thought there was a niche slot for one of @Nicholas Palazzo's dissolute youths of Nargothrond and he'd be a mentor for Barahir, which Professor Olsen mentioned in one of the sessions for the family trees.
Last edited: Feb 16, 2021

Staff member
Penlod's role in Episodes 1 and 2 of this season is very minor. He appears, and he has a name, but he's not really doing all that much at all. I can certainly understand the decision not to cast him as part of the Season casting at this time.

Yes, Bregolas will be a youth of Nargothrond in FA 410, when Andreth makes the decision to move to Ladros. He would likely be someone who enthusiastically supports the move, and yes, serves as somewhat of a mentor to Barahir. This is, however, a *very* minor role, and he's significantly different ages in all the episodes where he appears.

So, consulting the family tree:

Bregolas will be 14 years old in his first appearance in Episode 8.
Episode 9 takes place only a couple of years later, as the House of Bëor has settled into Ladros. So, now he's 16, and Andreth's kid brother during her romance with Aegnor. He may have some sort of scene of being eager to learn from the elves and train as a soldier, but...he's definitely not the focus of the episode.
The 'mentor to Barahir' role, or 'interim leader of the House of Bëor between Andreth and Barahir' role, would be in Episode 10...but the goal there would be to showcase Barahir, not Bregolas. He's 40 in this episode, and 49 if he appears in Episode 11.
He will be 59 years old during the final defense of Dorthonion in the Dagor Bragollach of Episodes 12 and 13, where he will die.

So, yes, it's certainly possible to say that Bregolas is the leader appointed by Andreth - but by the time we are telling that story, it will be Barahir on screen in Episode 10. Barahir is the main character - Bregolas has a mentor role.

If you want to see what Bregolas' role in Episode 8 will be, you may look at the Episode Outline: 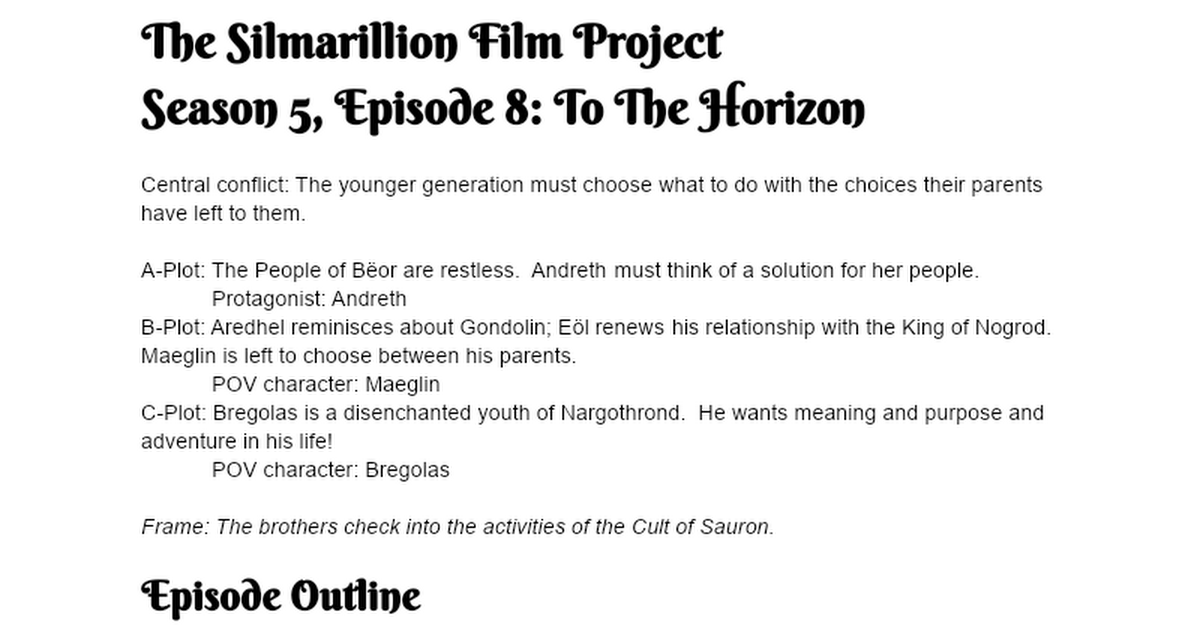 The Silmarillion Film Project Season 5, Episode 8: To The Horizon Central conflict: The younger generation must choose what to do with the choices their parents have left to them. A-Plot: The People of Bëor are restless. Andreth must think of a solution for her people. Protagonist: Andret...

docs.google.com
As you can see, he appears in multiple scenes, and is (sort of) carrying the C-plot to demonstrate what the issue in Nargothrond is.

We do not do a casting call for every character who ever appears in an episode of Silm Film with a speaking line. We have some very minor characters who are part of the story...and casting for those roles would be handled by the director of those episodes.
Last edited: Feb 17, 2021
You must log in or register to reply here.
Share:
Facebook Twitter Reddit Pinterest Tumblr WhatsApp Email Link
Top