Casting: Ethnicity and Migration Patterns of the First Age

I always imagined the Beorians and Halethrim to look more southern european or mediterranean (and honestly a lot of Noldor and Sindar too)
and the Easterlings look more eastern, southeastern, near-eastern or maybe west-sibirian in look.

We could, but we don't have to make them look white, since many European ancestors were very dark.

Faelivrin said:
Most Beorians are fair-skinned and look Elvish. Beren has light/golden brown hair, but some (a minority of) Beorians are “swarthy”, so Beren could be a light brown. Although presumably the Swarthy Men got that nickname by being darker than all or most Edain.
Click to expand...

Do you have anyone in particular in mind for Beren?
F

Nope, because I know zippo about actors.

Richard Madden, Ian Somerhalder, Arnie Hammer and Jake Gyllenhaal have all been suggested as Beren one Time.

I think Beren should be a dark british type of guy really.

Haerangil said:
Richard Madden, Ian Somerhalder, Arnie Hammer and Jake Gyllenhaal have all been suggested as Beren one Time.

I think Beren should be a dark british type of guy really.
Click to expand...

My vote's on Richard Madden.

So I'm working on some dwarf concepts, and I made this for my personal notes, but thought you guys might find it interesting/useful.

Basically just that Arda map I never finished drawing, with the main Dwarven migrations drawn on top of it, along with an overlay of Europe for scale.

I'm not at all suggesting that the ethnicity of the Seven Houses should line up with the countries on the Euro-map (this overlay was originally to help me get a grasp on the geographical diversity that exists within Middle-earth). The map just helps give a sense of the degree of possible diversity based on the extent of real-life diversity as it is distributed over a similarly sized area.

I could easily have move the overlay so that part of it was Europe, part Middle-east, and part Asia, but this is just a cropping of the whole map, and theses parts of Europe visibility lined up best with Tolkien's coast lines

PS The image uploader wasn't working, so I'm temporarily just hot-linking this from my dropbox (click for larger size); I'll fix it later if I can; if I forget, well, there's a reason you can no longer see the image.

Your link isn't working, Bre. When I "copy link location", the URL is http:// plus the entire contents of your post.

Faelivrin said:
Your link isn't working, Bre. When I "copy link location", the URL is http:// plus the entire contents of your post.
Click to expand...

Fixed it. Not sure how that weirdness happened

That map is problematic... it´s a europe map set upon a Karen Wynn Fonstadt map...
In relation to real-world proportions that means it´s not working, or not to be taken literally.

If one adjusts Tolkiens sketches from the shaping of Middle-Earth on real-world proportions you end up with a far bigger continent.

let me try to illustrate what i mean: 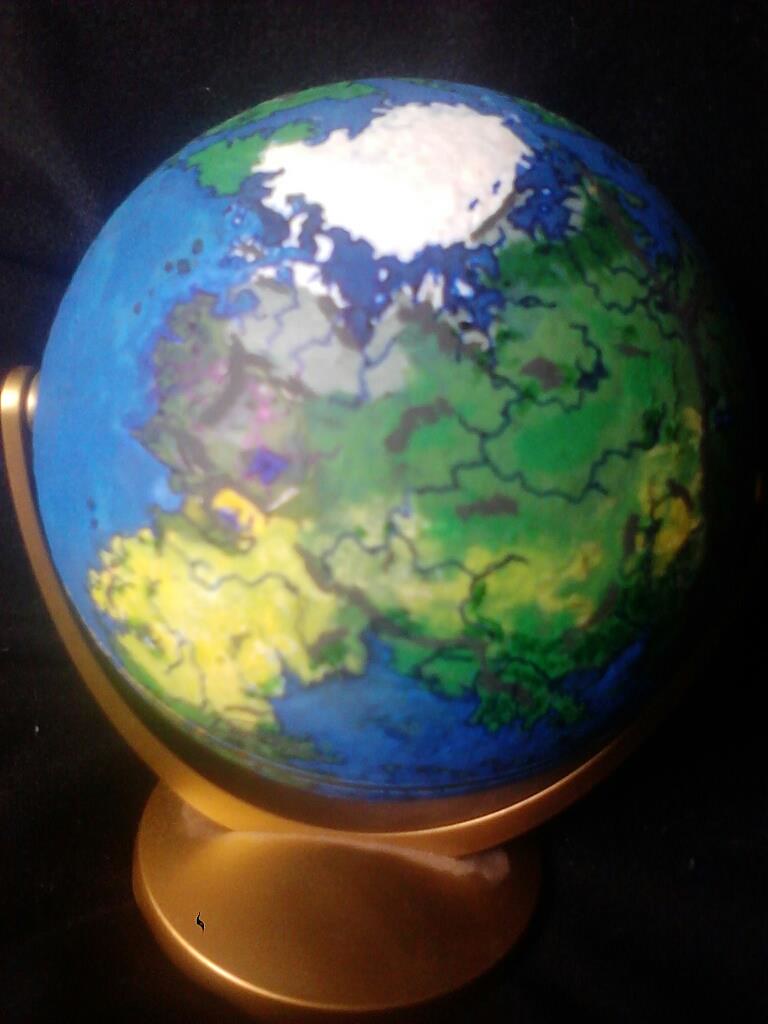 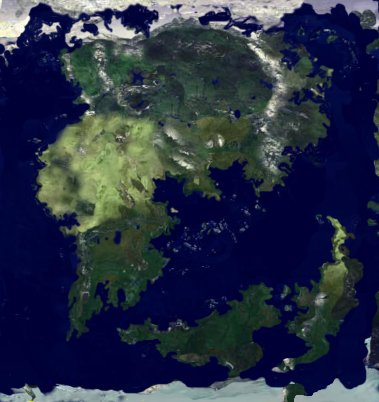 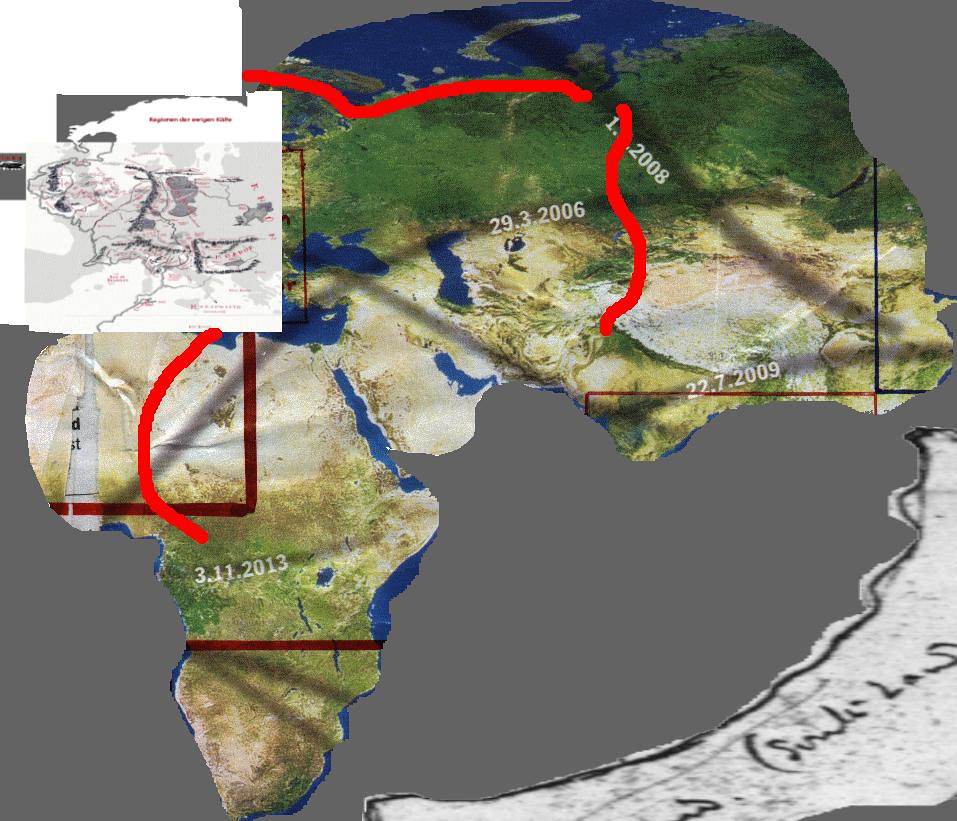 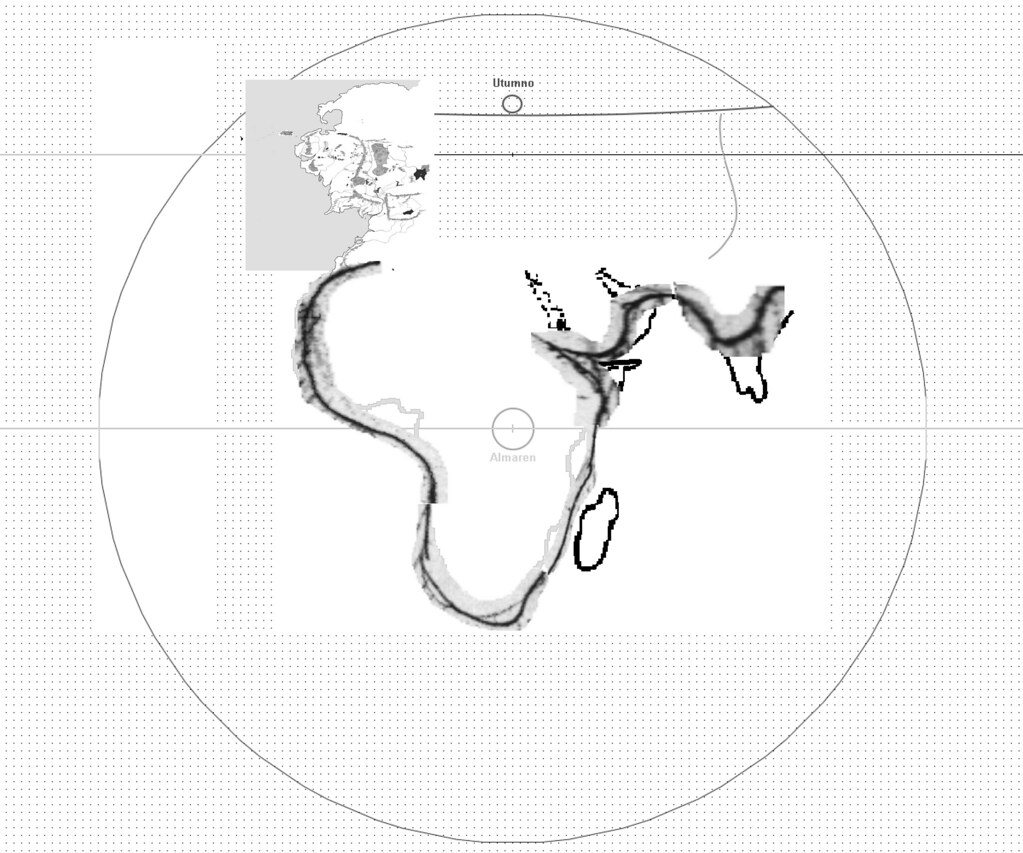 I´m sorry for spamming this thread with my graphics but that topic is very dear to me and i´ve had discussions and exchange of maps with people on the web for over ten years...

It's not really meant to be taken literally, it's just a rough thing put together for personal notes that I thought might be useful to share. The point isn't to have accurate scale, just a rough sense of scale to begin wrapping one's head around the distances involved in dwarven migration patterns.

All I did was line up Tolkien's multiple maps, the Fonstadts maps, and a Euro map based on the scale diagrams in the legend of each; then I just set them all to semi transparency so that I could see all of them together (sort of an averaging of all the maps together, it really isn't just Fonstadts maps, those are just more visible because they're on the less-busy edges) and just drew on top of them.

This is cropped (so that it's only showing east Beleriand and northern Middle-earth), so it's not showing Rohan, Gondor, or Mordor taking up most of southern Europe and moving south past the Mediterranean like it is in the images you've included. Perhaps I am not interpreting your images correctly?
... it probably doesn't help that I have this overlayed with only a bit of Europe and too much ocean for this particular cropped-region of the map, so it looks smaller...

I guess what I'm asking is by what means are you taking Tolkien's measurements and adjusting them to real-world scale? I'm not trying to sound hostile, I'm genuinely asking since I'm a little confused. Exactly what percent bigger are you suggesting what I have here be? If it's only a little off, then it still suits my purposes, but if it's a big enough difference to affect the distribution of diversity, I'd like to fix it.

Bre said:
Are you saying that Tolkien's maps, or rather the ones that he had Christopher draw, are wrong because they're drawn flat, as opposed to with a 3d globe in mind? Or are you saying that it's wrong because of Fonstadts shot-in-the-dark interpretations of the wider continent at-large (i.e. the far east and south)?
Click to expand...

They´re only maps
after all...

The problem with KWFs Atlas is that she used the overall outline of Tolkien´s SoME sketches, but treated the proportions of it in relation to beleriand as if Beleriand was not topically enlarged, but fitted in proportions with the outline...

But Beleriand and the Northwest of course do have a set scale, and when she added the rough continental outlines given to us by JRRT
to the Beleriand/Westlands maps, she didn't change the scale of the rest of the continent, but kept the relations from SoME... so we end up with a ridicusly small continent, that doesn't even reach the equator and doesn't go very far to the other eastern hemisphere... which Middle-earth DID according to Aragorn´s telling that in "(...)the far countries of Rhûn and Harad (where) the stars are strange (...)"

So the issue is with the smaller Beleriand? I did end up scaling that up as much as possible, fudging the scale a little in order to have the Blue Mountains line up, since they are the only common marker, but there's not much else to go on there.

I made this messy incomplete base map a few years back (and just drew over it this past weekend), so I can't remember exactly how I determined the scale, but looking at it now, it is possible that the Blue Mountains that we see in the First Age extend all the way down to where we see the White Mountains turning southeastward... hmmm... if that were the case the First Age dwarves would see a larger degree of difference based on North-South climates...

But it does seem like Beleriand isn't that big compared to the Middle-Earth we see in LotR... certainly travel seems to take less time in the Silmarillion, but that could be due to differing perspectives of the narrators.

As for Rhun and Harad, yeah KWF only has them getting into Russia and the Mediterranean, not different hemispheres, but I'm currently drawing dwarves for those regions with more leeway because of that.

... it's really only the Broadbeams, the Firebeards, and the Longbeards that one needs to worry about, since we know there was mingling between them from the migrations mentioned in the text, and their placements are fairly set in stone.

I was merely entertaining the possibilities a few of the Blacklocks, Stiffbeards, Ironfists, and Stonefoots, making their way back West for whatever reason, to see how it could affect the diversity of a certain Thorin & Company. Really that's the secret reason that this map even exists, not for SilmFilm, but for some stray headcanon idea that passed through my brain... I mean Dori/Nori/Ori and Bifur/Bofur/Bombur are not of the Durin's line like Thorin/Balin/Dwalin/Fili/Kili, but are still distantly related, so I was thinking maybe they were still part Longbeard but mixed with something else (besides Broadbeams and Firebeards)?

I would prefer at least some of the Broadbeams to be played by actors with somewhat dark skin, not all northern/European.

So now we are five seasons in, and casting Men for the first time. We have physical descriptions of each of the Three Houses of the Edain (ie the House of Hador are depicted as being tall and blond unless you’re Turin (who is dark-haired) and Hurin (who is short), but I admit to having some apprehension on casting the Easterlings, since most of the Easterlings (including the Haradrim in our Frame) are antagonistic figures. Do we go with accuracy and be labeled racist? Or do we blur the distinctions somewhat?

After several years of drawing and thinking about the very specific topic of race representations within Tolkien's work, I've ended up with:
- Dark-skinned (Mediterrainean/African) Teleri, who are darker than the Easterlings to begin with
- The Feanorians I based off the Mongolian/Russian region of the world
- I also have the first age dwarves more based on the middle-east, eastern Europe, and the Baltics
- The Haladrin are described in the text as having darker skin, so I generally go with middle-eastern and African for them (Haleth is a black woman to me)
- The Beorians I have as more Mediterranean, so more browned
- I have Melian as East Asian, which Luthien carries into the line of Beorians to further diversify
- Hador are very Scandinavian blonde/white, but they're infused with darker elements of the other two houses of Men (basically Morwen -> Turin)
- The Easterlings of Bor (loyal) are more black and Arabian
- The Easterlings of Ulfang (betrayers), while still more middle-eastern, are drifting closer to Mediterranean, so that they're more dark of hair and eyes but not necessarily skin (not pale, but not as brown)

So the key is to just make sure everything is diverse (it's more interesting and visually conveys a lot of storytelling/lore), and that the biggest bad guy in the scene isn't the darkest by default

Staff member
Yes, when we discussed the Valar, we wanted a lot of variety, and I think our casting choices show some (modest) diversity, with the understanding that the Valar can have elemental forms and special effects to enhance their otherness as well.

When we discussed the elves, the execs ran into a bit of a snag with showing the origins in Cuivienen. Because...that's very early in the history of elves, and they don't have much time to diversify (only a couple of generations pass on screen). And if they just so happened to wake up that way, with some families having different traits...then we'd run into the problem with showing the divisions of the elves. Because they all split off in different directions over the course of the second season, and it would be...weird...to watch them self-segregate based on physical traits. So we have not had much diversity with elven casting to this point, though there have been some nominations that have attempted to step outside the box.

The Dwarves of Nogrod and Belegost were our first opportunity to show physically diverse traits associated with particular groups. We decided that the dwarves of Nogrod would tend to be red-haired, and that the dwarves of Belegost would be dark-haired. Now, with the Edain entering the picture, we have the opportunity to craft three unique cultures. Differentiating them with different physical traits (including resemblance to various ethnic groups and a variety of skin tones) is definitely something we can do with them.
You must log in or register to reply here.
Share:
Facebook Twitter Reddit Pinterest Tumblr WhatsApp Email Link
Top