It could. But this is just one interpretation.

Also, I was thinking: would the forces under the House of Finarfin be any different in armor?

Besides they do not wear chain (yet)?

I don't know how the host of Valinor would have looked like... but i suggest to make them look a bit more like the Valar (or their Maiar maybe).

A point about mail capes: I don't think anyone would want to burden themselves with the extra weight to protect their back.

At last not if its common mail... theres still the possibility were talking about a fantasy material at this point

Haerangil said:
I already did propose that maybe the Sindar wear Helmets more similar to dwarf-Helms... 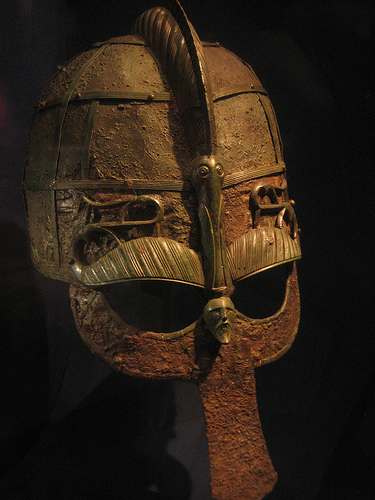 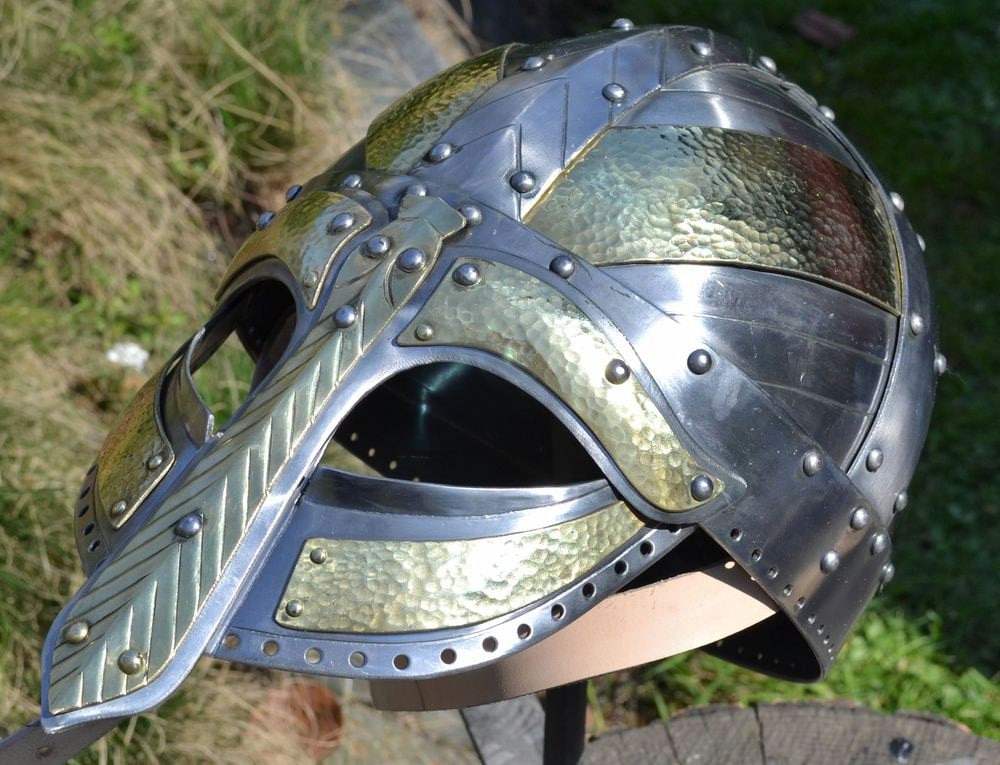 at least they should look visibly different from the Noldo Helmets, although maybe at later times, in Gondoloin where we´ll have a somewhat mixed culture, we could also add noldorin-like crestsm spikes ands Wings to them...
Click to expand...

I like the Vendelheim type helmets for the Sindar, but they could also save them for Haleth’s people. The symbol for the house of Haleth looks a bit like an extremely stylized version of those helmets:

question would be to what terms the edain have types on their own, or if they wear modified eldarin types...
comparison with roman military is a bit difficult here, because the germanic tribes did have quite able metalcraftsmen on their own, but the early auxiliaries often wore only slightly modified roman equipment.

However i can see that neither with the Green Elves nor the Haladin, i doubt both peoples are very far in metralworks, Beorians and Hadorians might be a bit further, but i still think they are getting equipped by noldo and dwarven smiths, and while they may have some smiths who had learned some of their craft from their elvish teachers, i doubt there are so many as they would develope a unique style on their own.
F

That's my feeling overall, as well. I imagine they're all in the stone age when they come to Beleriand. They've only even existed for a ~200 years at that point. Dwarves out east would probably rather trade metal goods for food, rather than teach Men to smelt metal.

Yeah sure! At the beginning... but they very soon come into the service of the noldor... they become soldiers, get outfitted, even live in the elven fortresses or their proximity. What they get from the elves... i doubt they have money, they get lands and elvish luxury goods.

Haerangil said:
Yeah sure! At the beginning... but they very soon come into the service of the noldor... they become soldiers, get outfitted, even live in the elven fortresses or their proximity. What they get from the elves... i doubt they have money, they get lands and elvish luxury goods.
Click to expand...

That’s a good point. Coinage is a fairly modern (well, modern from a ‘within the entire scope of human history’ point of view, and since this entire story is taking place in a hazy prehistorical age, it would make sense for them not to have coins, even if anyone decides to give anyone some kind of currency.

As for men and metallurgy, there can be a distinction of not only whether they use metals, but also what kind of metals they use. The Haladin, for example, can be more or less Chalcolithic and using stone and bone tools for the most part, but could potentially have copper tools, as well. Otzi was found with a stone knife and flint arrows, but also with a copper/arsenous bronze ax which he (based on arsenic levels in his hair) seems to have had a part in smelting, even though he was most likely a shepherd. And that’s just an example—I’m not saying any groups of men have to have metallurgy before contact with any of the elves, but I do think we need to be careful to not make it so that every technological or artistic breakthrough men have is the result of elven contact.

For the Haladin helmets prior to elven contact, if they have them, they could be made of ivory, like the Mycenaean boar tusk helmets, but maybe with the shape of the Vendelheim helmets, just a lot less refined. They could go with metal helmets later on.

I doubt they have much armor other than things traded with dwarves before in the east.

Haerangil said:
I doubt they have much armor other than things traded with dwarves before in the east.
Click to expand...

Maybe Men have boiled leather for armor? Wouldn’t be too much of a stretch if they know how to create fire.
Last edited: Jan 5, 2019

Ange1e4e5 said:
Maybe Men have boiled leather for armor? Wouldn’t be too much of a stretch if they know how to create fire.
Click to expand...

It probably wouldn’t be too much of a stretch. Humans in the real world have been deliberately using fire for tens of thousands of years, and there is some evidence that it predates Homo sapiens by a bit. And, when we meet men in the text, it’s unclear just how long they’ve been around, so however Eru caused men to be, I’d assume that they are using fire by the time they meet the Eldar. So they could use boiled leather, boar or walrus ivory, shark skin (if they happened to live near a coast) or any number of things for armor if they had cause to make armor—which is another question. Did any of the groups of men have cause to make armor (I’m assuming yes, if only to protect themselves from orcs, beasts, and other toothy things that want to eat them), and if so, was it ever for war? Even small scale tribal war? I’m just starting a reread of the Silmarillion, so I can’t actually remember if it says or not. (I’m sorry, I feel like I’m diverting this thread from the elves. This is the last men-centric post I’ll make in this thread.

Boiled leather is really nonsense..., yes they can and should wear leather and pelt clothes, but armour in the closer sense made of leather? I do not really believe in it...

That’s fair. Leather armor seems like a bit of a D&D-ish trope, especially with the way it’s usually presented. My main point was just that armor can be made out of things besides metal: leather lamella armor was used to some degree by the Bronze Age Chinese; laminar armor made of leather or animal hide as well as lamella armor made of bone was used by the Chukchi and other peoples who live in the Arctic Circle; both the European gambeson and the Aztec ichcahuīpīlli were made of woven cloth, with the latter hardened to the point it could withstand spears and arrows by being dipped in brine; the Mycenaeans made boars’ tusk helmets; some Tlingit armor was made of leather and/or wood slats; and so on.

Speaking of the Tlingit, would something like this work for the Avari?

Yeah padded or linen armour would make sense for some cultures, but probably not for stone age tribes. Also leather armour i th7nk is very sophisticated, people to wear such armour types would be wealthy cattle lords... i could think that work for ulfangs peoole, but not woodsmen like the haladin, who i would compare to some early and rather backward, germanicor baltic tribes.

Concerning wood elves and avari, yes i think south and mesoamerican armour types could work as a reference, or some southeastern asian cultures too maybe.

I could see these wearing armor made of woods and other materials.
F

The Haladin crossed the Blue Mountains 318 years after Mortals were awakened at Hildorien, give or take 2 years. This project uses the flat world chronology in which Men awakened with the first Sunrise, and the Annals of Aman, Grey Annals, and later Tale of Years gives us dates for the events of the First Age.

Leather armor is indeed a D&D trope, but it is also the only flexible armor available to people who haven't yet learned to weave (or trade for) cloth. I do imagine the Edain could have cloth when they first come to Beleriand.. but it's possible they don't yet. In the real world, people apparently didn't use more than regular clothes for armor until the Bronze Age, but they also weren't up against the armies of the Devil. So... Fire and clothing they would certainly have. The Hadorians even had herds of livestock. And I imagine they all had dogs.

Anyway, keep in mind that we didn't show Orcs existing at all until Morgoth returned to Angband, so there was nothing for Men in the East to have to fight except for large evil animals/monsters, and each other.

Men fighting each other would be the main reason for them to have armour and weapons i guess...

If we ever show the fallen men of beleriand i think they should at one point start to wear armour, and the soon the rebels will be armed too.
F

Do you mean the fallen men of Hildorien?

It's very interesting to think about how quickly the men would progress in their crafts, seeing as they could maybe learn a thing or two from the other peoples, depending on if there is any contact or none. Do we have a contrast there, between groups that did or didn't have that contact?

And it's also always a question of price and prestige. Early celtic tribes in Europe (800 BC) had metal cuirasses and swords and everything, but probably only for the couple of leaders, but there also just seems to be a good part of the people which didn't wear armour at all, or leather armour in various stages of elaboration. I think it also depends on how many resources/manhours and how much know-how were available from place to place and time to time. I think it's just important not to have a whole group of men in only boiled leather armour like a group of lowlevel dnd characters that wouldn't work I agree. But differently processed leather isn't bad in itself I think.

In the beginning they won't have any skills at all, but the development will surely not progress in a historical way, I mean they will not live through an entire stone age until they discover metal working and other crafts, as they live in a world which is already developed much further. (This goes not only for warfare, also for developments in their societies, trade etc.) But which tribes discover this where and when?
Last edited: Jan 9, 2019
You must log in or register to reply here.
Share:
Facebook Twitter Reddit Pinterest Tumblr WhatsApp Email Link
Top