The Mouth of Sauron is a servant of Sauron known to be active near the end of the Third Age, holding the title Lieutenant of Barad-Dûr. A Man of Black Numenorean ancestry, they took up service to Sauron "when the Dark Tower rose again", and by the time of his appearance before the Black Gate they were learned in sorcery and more cunning and cruel than Orcs.

The Hosts want the Mouth of Sauron to be a lean woman of African descent, putting her as a physical opposite to the Haradrim Matriarch Queen Azrâindil. She is the main antagonist of the Season 5 Frame, who eventually corrupts Azrâindil's son Arnûben into helping Sauron; Arnûben will eventually become the Mouth of Sauron who appears before the Black Gate in The Return of the King. The Hosts also suggests that the Mouth has part of Thurwingwethil's bat motif in her clothes.

Zoe Saldana hasn't done many villainous roles, but her characters are often charming with an occasional ruthless edge, such as the vengeful Cataleya or Gamora being the stoic straight-shooter among the Guardians of the Galaxy.

Zoe Saldana, Actress: Guardians of the Galaxy. Zoe Saldana was born on June 19, 1978 in Passaic, New Jersey, to Asalia Nazario and Aridio Saldaña. Her father was Dominican and her mother is Puerto Rican. She was raised in Queens, New York. When she was 10 years old, she and her family moved to...

www.imdb.com
Age: 42 (will be 43 in June)
Roles: Anamaria in Pirates of the Caribbean: The Curse of the Black Pearl, Lieutenant Uhura in the Star Trek Reboot trilogy, Neytiri in Avatar, Cataleya in Columbiana, Gamora in the Marvel Cinematic Universe

www.imdb.com
I did not find her age listed on Wikipedia or imdb, so presumably she would like to keep that a bit private. She did graduate from an acting school in 2004, and has been active in film since 2007. So perhaps late 30's?

T'Nia Miller has had roles in a variety of TV shows, some of which had horror/suspense themes. She has a warm yet unsettling persona as housekeeper Hannah Grose in The Haunting of Bly Manor, and I think her portrayal of the Mouth of Sauron would be quite interesting. She has a range from motherly smiles to nearly uncanny valley. I think she would bring a sincerity to the role that would make it quite an effective performance, as well as do a splendid job of hinting at the loss of personal identity that the Mouth of Sauron experiences in an understated way. 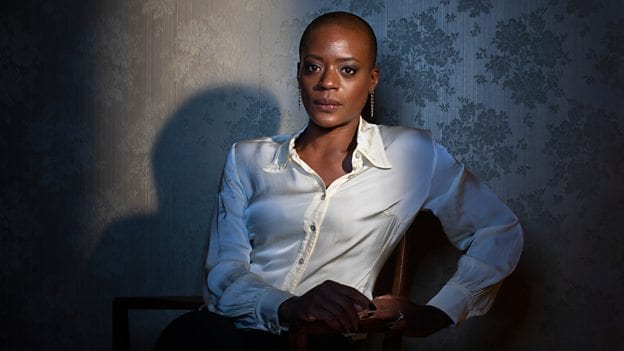 T'Nia Miller as Hannah Grose in The Haunting of Bly Manor:

Alfre Woodard has had a pretty versatile career from playing the everyman Lily in Star Trek: First Contact to the grieving Miriam Sharpe in Captain America: Civil War. Two minutes onscreen and her one scene drives the actions of half the cast.

Alfre Woodard, Actress: Star Trek: First Contact. Alfre Woodard was born on November 8, 1952 in Tulsa, Oklahoma, the youngest of three children of Constance, a homemaker, and Marion H. Woodard, an interior designer. She was named by her godmother, who claimed she saw a vision of Alfre's name...

Lily confronts Picard over his vengeful attitude towards the Borg
As Miriam Sharpe in Captain America: Civil War

This actress is known from the Watchmen series (fantastic!) and The Sinner, among other things. She has a strong presence, as the role demands, and can be both charming and a little scary. She'd be great.