This is a good looking guy, he's been a model, and look at the eyes! He is totally believable as a fiery fanatic. He'll be great!
I suggest we choose an actor who we are certain we don't want later on, as more important characters. I think we can safely use Jason here, he's not going to play Fingolfin or Turin. 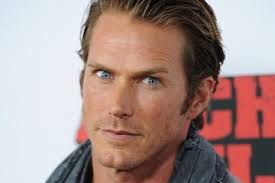 Matt Bomer
http://www.imdb.com/name/nm0093589/
I mean look at him! If he has a female version, would be Ungoliath!

This will be Alexander Skarsgard's second nomination for a season one character. I feel like his agent should be paying us. Skarsgard has that model-y looking face that women apparently find so attractive (clearly I'm not bitter about it or anything.) He's also played a monster, albeit the beautiful sparkly kind or whatever vampires do on True Blood. He, his Swedish accent, and his model-y fire spirit posse would fly around Arda for a few episodes defying the establishment and making all the dude-ainu stand a little closer to their lady-ainu partners. At some point, Gothmog can take off his t-shirt and run along the seashore as fan service to our wonderful female viewers. And then...

... we drop a lamp on him and he melts away into the horrific demon of shadow and flame we all know and love. I don't know what Alexander Skarsgard's voice sounds like, but if it's anything like his father's then he'll sound perfect for a fallen Balrog. And if he doesn't sound like his dad, we'll just hire him for post-lamp episode voice dubbing. It's a win-win situation.

EDIT: WAS CHOSEN TO PLAY OROMË
Last edited by a moderator: Jul 3, 2021