Staff member
Keep in mind that the actor cast as Maglor will need to be a talented singer. Preferably someone with a very strong voice.

He is often characterized as the 'kinder, gentler' son of Fëanor, and it is true that he has some redeeming qualities. But keep in mind that he takes part in multiple battles and kinslayings, so he's definitely a strong fighter as well.

Here's some artwork by Jenny Dolfen for inspiration

Maglor as the talented but tormented musician:
"The Harp No Longer Sings"

And here we have Maglor as a reluctant leader, thrust into the responsibilities of leading the Fëanorean camp after the death of his father and the capture of Maedhros.
"Sealing Maedhros' Fate" 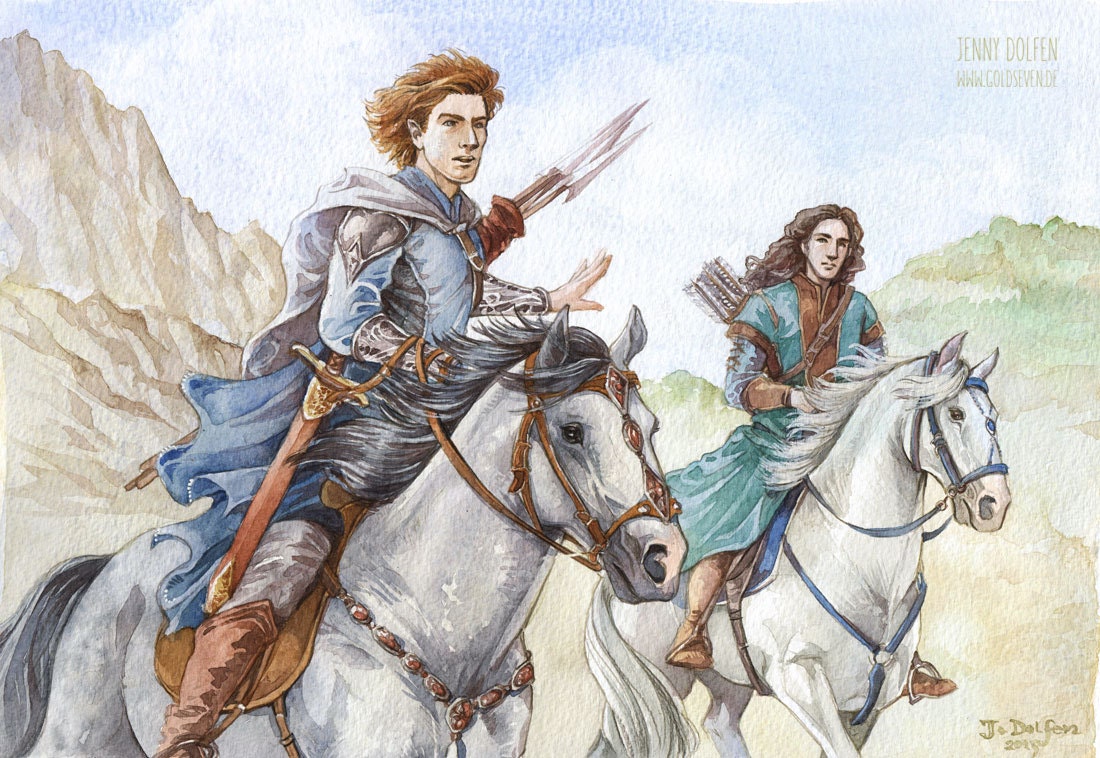 And the *main* reason he's often considered the best of his brothers - he decided to foster Elrond and Elros rather than, say, murder them.
"As Little Might Be Thought"

And of course I can't help but also include the artwork of Catherine Karina Chmiel (Kasiopeia): Watching Maedhros relearn how to use a sword with his left hand:

"And Maglor Took Pity Upon Them" 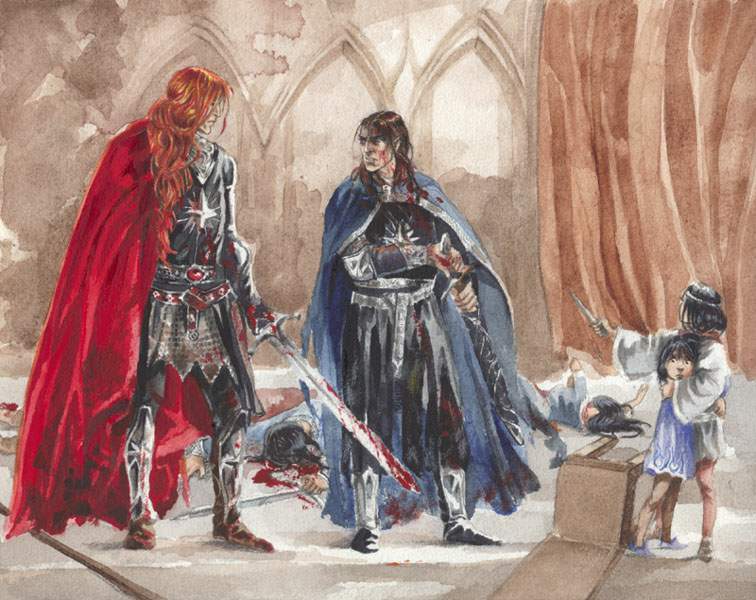 "Captive" (Maedhros is the foreground figure; Maglor is in the background) 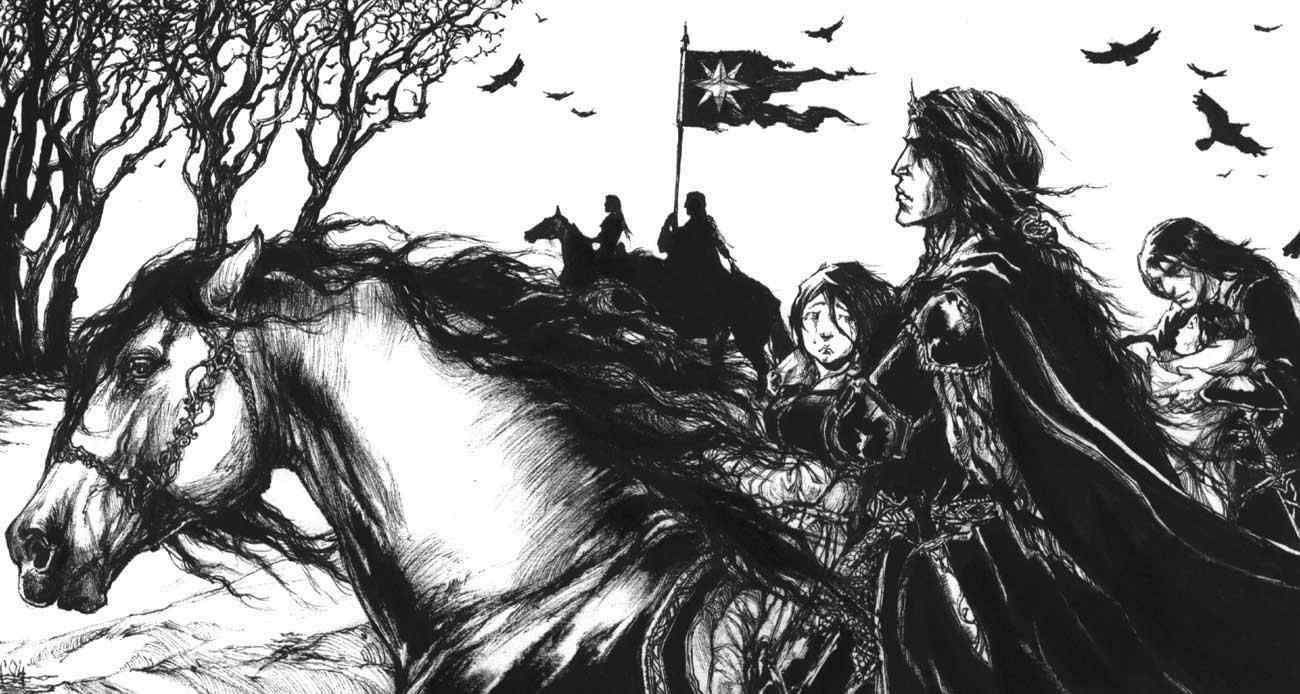 Staff member
We've been through this a bit and some of us have grown fond of the idea to cast Aaron Lazar. He's got a great Fëanorean look, and he can sing. I also think that he looks like a guy who could be both good and bad, and your feelings for him will sometimes be full of hopeful sympathy and sometimes you will dislike him.

Well, this Maglor artwork by Sian Lloyd-Pennell seems to resemble Henry Cavill, so I figured hey why not? I believe he can sing, but can't find a specific link to verify that just yet. He's quite built at the moment for his current role, but can likely trim back down a bit for Maglor, if need be.

Staff member
Does he sing at all?

Not for his career, no. I feel I've heard his singing voice before and liked it, but I can't remember where from or when. And I haven't been able to pull up any actual footage. So there's that.

I also rather like the idea of David Berry. He's trained as a singer and violinist. Coincidentally, he's also actually played a role where his character stepped in to be a kid's foster father before. I simply couldn't help but think of Maglor.

Here's a video of him managing to sing through a cold:

Staff member
It's a pity that Matt Bomer is just turning 40 or I wouldn't hesitate to suggest him. He can apparently sing, and I think he'd be a great Maglor.

Richol Richards said:
Well, this Maglor artwork by Sian Lloyd-Pennell seems to resemble Henry Cavill, so I figured hey why not? I believe he can sing, but can't find a specific link to verify that just yet. He's quite built at the moment for his current role, but can likely trim back down a bit for Maglor, if need be.

Hey! He can sing! At least for a few seconds!

Wow, thanks for the find! Yeah, I've never seen this but I can't seem to find that other clip...so, well done!

Yes. Maglor never struck me as more of a thinker rather than a fighter.

Ange1e4e5 said:
Yes. Maglor never struck me as more of a thinker rather than a fighter.
Click to expand...

I'm confused about what you mean here.

Staff member
I think we have to assume that all of the sons are formidable fighters.

Ange1e4e5 said:
Yes. Maglor never struck me as more of a thinker rather than a fighter.
Click to expand...

Not sure what you mean, either, but I'm going to take the opportunity to remind ourselves that Maglor is described as a singer and composer, yes, but not as a scholar. So the "thinker" could be overblown. Considering how little we actually get of Maglor's personality, it's just as in keeping with Tolkien to model him on William IX than on Owen Barfield.

I think it's easy to assume he has scholarly attributes, given Elrond's later career, but I think we should be cautious crafting his character, and try to remain aware of when we are conveying actual Tolkien canon and our own "filling in" headcanon.

Staff member
Ed Cooper Clarke (known from Downton Abbey) has starred in Cabaret and can sing (Edit: Not sure anymore, I can't find the info). He has the look of a haughty Fëanorean, I think. Should be a candidate.