This one is going to involve the escape of Rhogrin, the Great Cat Hunt of Brethil, and the Rise of Hador. Finally! An episode with some pre-established story!

How should Rhogrin break free?

What motivates Hador to entreat with the Elves and be taken into their service?

How many are escaping with Rhogrin, outside of Annael?
Click to expand...

That's probably something we will get into detail about on the 10th, but I imagine that mining into one of the hidden exit tunnels might be involved.

What motivates Hador to entreat with the Elves and be taken into their service?
Click to expand...

He's pretty young, so just the "Call to Adventure" from an Elvish warlord might be enough.

That's probably something we will get into detail about on the 10th, but I imagine that mining into one of the hidden exit tunnels might be involved.

He's pretty young, so just the "Call to Adventure" from an Elvish warlord might be enough.
Click to expand...

Is Fingolfin/Fingon making that Call this episode, or was it last?

Ange1e4e5 said:
Is Fingolfin/Fingon making that Call this episode, or was it last?
Click to expand...

This episode. We haven't met Hador yet.

Staff member
Here is the Episode Outline from Episode 6: 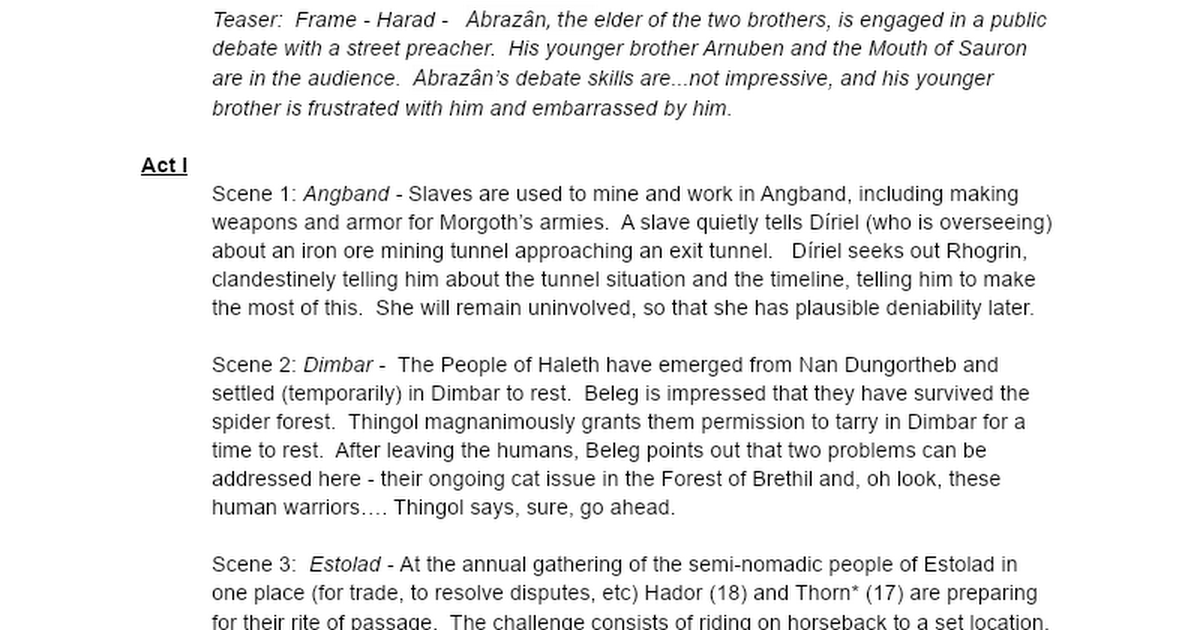 Staff member
A few comments about the story in this episode. As Nick mentioned above, finally we have an action-heavy episode with clear story arcs! So, while we had some work to do during the script discussion, it was less of a hard slog than some of them have been this season.

We found an opportunity to introduce warg riders. They will be appearing in the Dagor Bragollach in greater numbers, of course, but they were wanted here to explain how Hador happened to arrive in the nick of time to rescue Rhogrin and Annael, and also to make Hador's feat of heroism more impressive than simply killing a few orcs.

We also gave Haleth a rather unusual strategy for hunting Tevildo, but it gave us the opportunity to showcase that all of the People of Haleth (not just her elite bodyguard) are formidable foes, and to show a cunning strategy that the march-wardens of Doriath would have been unlikely to come up with on their own. We wanted to make it clear why Haleth was able to defeat the cats when the elves had not been able to do so prior to this. (As far as I am concerned, the best example of 'sentient predators' is the velociraptors of Jurassic Park, so I hope Tevildo's cats will be equally challenging in our portrayal!)

We also took the opportunity to do some world-building with the soon-to-be House of Hador. In Episode 5, we had introduced them as a group of loosely-joined tribes/family units that travel around the plains of East Beleriand as nomads, making new settlements. Here, they are gathering for a yearly event where they all come together in one location temporarily. Estolad is thus an event where there can be celebrations, trade, gatherings, decisions made, etc. For this episode, we are focusing on the coming of age trials for the young men, but in the next episode we will be focusing on the Council gathering at the same event. So, we are setting the stage for that, which will be something like the Thing. Conveniently, it gives Hador a reason to return for the Council, even if he is unaware of the issues brewing. (If we want this gathering to be 'every 2 years' or 'every three years' we could make that work, too.)

As for the overarching story that is tying all of these stories together - we decided that what this action-heavy story needed was an emphasis on the importance of diplomacy. The heroes are only in place to succeed because of the hard-won diplomatic efforts of various characters. So, it is Fingon's appeal to the Men of Estolad that places Hador in the right time and place to rescue the escaping prisoners. It is Díriel's hands-off coordination that allows the escape attempt to happen. And it is Beleg's efforts as go-between that allow Haleth and Thingol (both proud and stubborn characters) to come up with a solution that is satisfactory to both of them. While we likely won't be drawing direct attention to this within the story, we do use the frame story to highlight the tension between heroic action and diplomatic speeches, and how the latter is at the heart of things. Though we put that insight not in Gandalf's mouth, but the Mouth of Sauron!