Staff member
I like the idea of Olorin being a messenger of the Valar (not Ulmo) to deliver Fingolfin's premonition. He would most likely appear in a dream.

And prophetic messages should work on multiple levels - literal and immediate vs figurative and big picture. The message St. Francis received while praying in front of the crucifix at San Damiano was, 'Francis, rebuild my church, which as you can see is falling into ruin.' Naturally, Francis took this quite literally - he was praying in a tiny abandoned chapel that was indeed in need of repairs. So, he took some of his father's belongings, sold them, and purchased building supplies to do the repairs. Francis fixed up the little chapel, just like he'd been told to do. His father wasn't thrilled about the stolen goods, though, so it led to a bit of a bru-ha-ha where Francis publicly disowned his father and was taken in by the Church. And then he founded the Friars Minor and the Poor Clares and did a lot to restore the integrity of the Church in his day.

But back to prophecy - the dual meaning of the word 'church' is integral to that story. It means both a building, and a community of believers. You can rebuild either, but in different ways.
Whatever message Fingolfin receives needs to be open to interpretation, and preferably would work on multiple levels. Fingolfin can't be wrong, and the Valar can't be liars.

So, to begin with 'Morgoth is not unassailable.' This is a true statement. Morgoth will be defeated in the War of Wrath. And even in the duel with Fingolfin, Morgoth will be permanently injured. The statement itself doesn't command a course of action or make any promises. . .but there is a strongly implied indication to act there.

'The Siege will not contain Morgoth' is another true statement of prophecy. The Siege will be broken imminently. We aren't going to be let down by this warning - there is immediate pay out. It gives urgency to Fingolfin's desire to act.

Another element of the message should be that 'True hope lies in the West'. This obviously parallels Ulmo's message to Turgon, but also is one of those unrefutably true statements. Is it a promise of aid? Not...really. But if there is any indication of when that aid will arrive, it cannot be a cheat. Eärendil is Fingolfin's great-grandson. But if this were pointed to Eärendil, it would involve Ulmo. So, rather, I think it should come across as a warning that the Noldor are on their own. If someone says they will not help you until the stars fall from the sky, you don't look up the timing of the next meteor shower...you assume they aren't helping. So if it sounds like a refusal to help, but actually reveals the conditions under which they would help...that might work. Something like, 'The Valar will not aid you while the sundering seas divide you and them.' Fingolfin could think that his suicide mission puts him on the correct side of the Sea to plead his people's case, in a 'if you strike me down...' way.

Staff member
Here is our work-in-progress Episode Outline. We will continue to discuss this episode next Sunday March 28th at 7:30 PM EDT 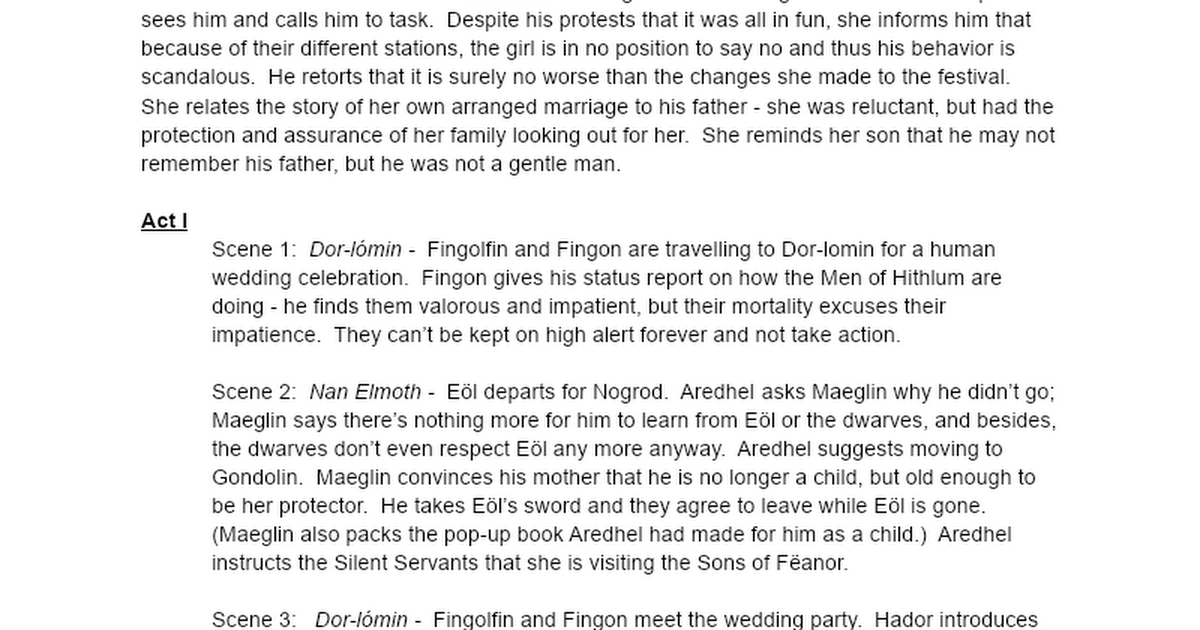 Tonight's discussion fleshed out the Aredhel/Maeglin/Eöl story fairly well, but then, this was the story that was in the book, so a bit of an easier task to flesh that out and put everything together.

We are still working on the Fingolfin storyline. Part of the problem is that we currently have a collection of scenes, not really a cohesive storyarc through the episode. We know we are working towards Fingolfin's vision, but...what is happening to bring him to that point? Yes, the human wedding is the backdrop, but what is happening for Fingolfin here?

The 'vision' itself is of course problematic. While it will likely have the elements discussed on this thread already, Bre Melvin also suggested adding an element of hope to it focused on the advent of Men in the story. If this could be the moment where Fingolfin realizes that Men will make a difference in the fight against Morgoth, and to consider them as hope for the future. (This wedding, for instance, is one step in the path towards...Eärendil).

If Olorin is the messenger, he should be kindling hope, not just repeating dooms that were already spoken by Mandos. He can warn Fingolfin that his time in Middle-earth draws to a close, but more of a carpe diem sort of thing than a message of doom.


The execution of Eöl happens at the end of this episode. We talked a lot about what to show, or what not to show. There was some importance placed on maintaining the high drama of this event - nothing silly or quick about it.

Here are the two film executions I referenced in the discussion:
Prison guillotine scene from Papillion:
Pirate mass hanging scene from Pirates of the Caribbean: At World's End:
While neither of these scenes tells the story we want to tell with Eöl, they do build up tension/horror/anticipation for the executions appropriately for the stories they are telling. When the camera cuts away from the death scene makes a difference.

I could see the execution being similar to the one in Game of Thrones where Robb executes Rickard Karstark. Like Eol, the defiant and belligerent Karstark issues a curse on one of those present. Robb’s execution of Karstark is one of those scenes in both the books and the show where it’s debatable that it’s the right thing; while certainly the honorable thing to do after Karstark murdered young boys and showed obvious insubordination, it was the wrong thing from a pragmatic sense since in executing Lord Karstark, Robb costs the loyalty of a large section of his troops and is one of the various factors that leads to the Red Wedding. With Turgon, yes Eol committed murder, but Aredhel asked him to spare Eol so Turgon isn’t completely clean of executing him.

Staff member
The main difference with Gondolin is that there is no precedent for executing a prisoner. Never before has an elf in Gondolin attempted to murder another elf. Nor is anyone going to discuss the 'pragmatism' of carrying out an execution. So, while we can look at examples of executions from other stories, in most cases, none of these will be 'the first execution' ever. Turgon has seen kinslaying in the past; it was not punished with death, but with exile (albeit exile that promised 'slain ye may be, and slain ye will be'). However, with the restriction that no one may leave Gondolin, exile is not an option. The only choices are life imprisonment or execution. Aredhel may have pleaded for mercy, but Aredhel dies of her wound. Turgon asked Maeglin what Eöl has done to Aredhel in the past, and the picture he paints is not very flattering. Turgon concludes that Eöl's actions deserve death, and that is the sentence he gives him. A sentence like this is not unjust simply because the victims asked for mercy.

Staff member
Our main challenge for this evening is to come up with a cohesive storyline for Fingolfin. What is he struggling with throughout the episode that will lead up to his visionary dream chat with Olorin? We need to integrate that into his story in such a way that we are seeing the vision as the culmination of his storyline.

MithLuin said:
Our main challenge for this evening is to come up with a cohesive storyline for Fingolfin. What is he struggling with throughout the episode that will lead up to his visionary dream chat with Olorin? We need to integrate that into his story in such a way that we are seeing the vision as the culmination of his storyline.
Click to expand...

I’m thinking like: he’s surveying his people (as mentioned in the opening line of Chapter 18 of The Silmarillion) and has an inkling of an idea for the Big Push against Morgoth, which the vision chat with Olorin appears to validate: this is the time to strike against Morgoth.

Ange1e4e5 said:
I’m thinking like: he’s surveying his people (as mentioned in the opening line of Chapter 18 of The Silmarillion) and has an inkling of an idea for the Big Push against Morgoth, which the vision chat with Olorin appears to validate: this is the time to strike against Morgoth.
Click to expand...

So, a couple of things: In this case, does "his people" mean the humans at the wedding he's attending? How do you imagine we depict Fingolfin "having an inkling"?

Nicholas Palazzo said:
So, a couple of things: In this case, does "his people" mean the humans at the wedding he's attending? How do you imagine we depict Fingolfin "having an inkling"?
Click to expand...

I was thinking of a more general approach and as far as "having an inkling", it shouldn't have to be a hard slam as far as Fingolfin being satisfied with how things are and Olorin changing his mind.

Ange1e4e5 said:
I was thinking of a more general approach and as far as "having an inkling", it shouldn't have to be a hard slam as far as Fingolfin being satisfied with how things are and Olorin changing his mind.
Click to expand...

So you're saying Fingolfin communicates this inkling to Olorin during the vision rather than before?

Nicholas Palazzo said:
So you're saying Fingolfin communicates this inkling to Olorin during the vision rather than before?
Click to expand...

If it keeps things consistent with Fingolfin, yes.

We'll have to see how we can make it work tonight during our conversation.

Staff member
I’m happy that you discuss Olorin being messenger to Fingolfin, we toyed with the idea earlier and I’ve liked it since. But deciding what Olorin should say is tricky business.
Something containing (I’m just brainstorming)
- Don’t lose hope
- Be the leader of Men
- Pride is the weakness of the Enemy, don’t let it be yours
- Your fear is the Enemy’s greatest weapon
- Valar will not change the conditions of those who do not change (or something like that)