I think our trolls should get a thread on their own, just as with the orcs i tried to collect some quotes...


“Trolls, in their beginning creatures of lumpish and

brutal nature, had nothing that could be called true language

of their own; but the evil Power had at various times made use

of them, teaching them what little they could learn, and even

crossing their breed with that of the larger Orcs
Click to expand...

Difference between trolls - stone inhabited by goblin-spirit,
stone-giants, and the 'tree-folk'. [Added in ink: Ents.]
Click to expand...

[?Thus] questions were also asked concerning the fate and
death of Men. All [?read Also] concerning other 'speaking', and
therefore 'reasonable', kinds: Ents, Dwarves, Trolls, Orcs -
and the speaking of beasts such as Huan, or the Great Eagles.
Click to expand...

are Orcs
'immortal', in the Elvish sense? Or trolls? It seems clearly
implied in The Lord of the Rings that trolls existed in their own
right, but were 'tinkered' with by Melkor.
Click to expand...

it is said of Trolls:
In their beginning far back in the twilight of the Elder Days,
these were creatures of dull and lumpish nature and had no
more language than beasts. But Sauron had made use of them,
teaching them what little they could learn, and increasing their
wits with wickedness.
In the long letter of
Click to expand...

I am not sure about Trolls. I think they are mere 'counterfeits',
and hence (though here I am of course only using elements of
old barbarous mythmaking that had no 'aware' metaphysic)
they return to mere stone images when not in the dark. But
there are other sorts of Trolls beside these rather ridiculous, if
brutal, Stone-trolls, for which other origins are suggested. Of
course... when you make Trolls speak you are giving them a
power, which in our world (probably) connotes the possession
of a 'soul'.
4. See p. 138.
Click to expand...

The Elves would have classed the creatures called 'trolls' (in
The Hobbit and The Lord of the Rings) as Orcs - in character
and origin - but they were larger and slower. It would seem
evident that they were corruptions of primitive human types.
Click to expand...

he seems to have been thinking of Trolls, and specifically of
the Olog-hai, the great Trolls who appeared at the end of the Third
Age (as stated in Appendix F): 'That Sauron bred them none doubted,
though from what stock was not known. Some held that they were not
Trolls but giant Orcs; but the Olog-hai were in fashion of body and
mind quite unlike even the largest of Orc-kind, whom they far sur-
passed in size and power
Click to expand...

That Sauron bred them none doubted, though from what stock
was not known. Some held that they were a cross-breed


between trolls and the larger Orcs; others that they were
indeed not trolls at all but giant Orcs. Yet there was no kin-
ship from the beginning between the stone-trolls and the Orcs
that they might breed together;(5) while the Olg-hai were in
fashion of mind and body quite unlike even the largest of Orc-
kind
Click to expand...

I have not found a lot yet on how trolls look like, but there seem to be various ideas what they might be... i think we could have different sorts of trolls and even something inbetween orc and troll if we want to... but technically it would both be just different categories of soldier or infantry types, both effigies steered by their masters will, stupid and mistreated animals and bodies somehow imbedded with some not exactly defined kind of soul or will on their own.[/QUOTE]
Last edited: Jan 4, 2019
F

Haerangil thank you for again gathering quotes. That'll be very useful. But would you, please, cite what books and texts those passages come from? It matters which were from Myths Transformed, which were from LotR, and when each was written.


There are at least 2 kinds of Trolls: Stone-Trolls, and Olog-Hai. Stone-Trolls are the counterfeits, made from stone and doomed to turn back into stone when touched by sunlight. Olog-Hai were the corruptions of living creatures, although I'm pretty certain that pegging them as corruptions of humans is from a tentative Myths Transformed text and also contradicts the statement that they are so different from Orcs that the two can't breed together. Either Olog-Hai or Stone-Trolls, or both, may have originated as dull, lumpish, wordless things when they were first either discovered or built. Maybe Stone-Trolls even remained wordless until Sauron started teaching them to talk in the Second or Third Age.

"Giants" might be (an) additional kind(s) of Troll, assuming that isn't just a word for Trolls in general, or an empty piece of hobbit folklore. Or "Giant" might be a generic enough word to include both Trolls and Ents.

The Stone-Trolls in the Hobbit were illustrated by Tolkien as scaly humanoids, with ears shaped like cats' ears. H.E. Riddert colored them green; I don't know if that was at Tolkien's direction. Elsewhere Trolls of unspecified species are described as toe-less, and either scaly and naked or wearing a close-fitting scale mesh armor. The Trolls in The Hobbit were wearing some clothes, although Tolkien drew them naked.

I don't know of any statements specifically about Olog-Hai appearance, and I suppose what they look like probably depends somewhat on what they were corrupted from. Corrupted Ents would look pretty different from corrupted gorillas or corrupted bears.

Edit: The Hobbit narrator says that Trolls argue a lot, even the ones with only one head. Which implies some Stone-Trolls have multiple heads. Hey, why not?
Last edited: Jan 8, 2019

The lord of the rings and the hobbit have both most details on what trolls look like, again with some of jrrts illustrations..

from the great heavy faces of them, and their size, and the shape of their legs, not to mention their language,

They rested for some time in the glade, and took their mid-day meal right under the shadow of the trolls' large legs.

A huge arm and shoulder, with a dark skin of greenish scales, was thrust through the widening gap. Then a great, flat, toeless foot was forced through below.
-lotr,fotr
Click to expand...

It belonged to a large Man-like, almost Troll-like, figure, at least fourteen foot high, very sturdy, with a tall head, and hardly any neck.

Even as he spoke, there came forward out of the trees three strange shapes. As tall as trolls they were, twelve feet or more in height; their strong bodies, stout as young trees, seemed to be clad with raiment or with hide of close-fitting grey and brown. Their limbs were long, and their hands had many fingers; their hair was stiff, and their beards grey-green as moss. They gazed out with solemn eyes, but they were not looking at the riders: their eyes were bent northwards. Suddenly they lifted their long hands to their mouths, and sent forth ringing calls, clear as notes of a horn, but more musical and various. The calls were answered; and turning again, the riders saw other creatures of the same kind approaching, striding through the grass. They came swiftly from the North, walking like wading herons in their gait, but not in their speed; for their legs in their long paces beat quicker than the heron's wings.
-lotr,ttt
Click to expand...

behind walked mountain -trolls to wield it.
-lotr, rotk
Click to expand...

out of Far Harad black men like half-trolls with white eyes and red tongues.
-lotr,rotk
Click to expand...

But through them there came striding up, roaring like beasts, a great company of hill-trolls out of Gorgoroth. Taller and broader than Men they were, and they were clad only in close-fitting mesh of horny scales, or maybe that was their hideous hide; but they bore round bucklers huge and black and wielded heavy hammers in their knotted hands. Reckless they sprang into the pools and waded across, bellowing as they came. Like a storm they broke upon the line of the men of Gondor, and beat upon helm and head, and arm and shield as smiths hewing the hot bending iron. At Pippin's side Beregond was stunned and overborne, and he fell; and the great troll-chief that smote him down bent over him, reaching out a clutching claw; for these fell creatures would bite the throats of those that they threw down. Then Pippin stabbed upwards, and the written blade of Westernesse pierced through the hide and went deep into the vitals of the troll, and his black blood came gushing out. He toppled forward and came crashing down like a falling rock, burying those beneath him. Blackness and stench and crushing pain came upon Pippin, and his mind fell away into a great darkness.
-lotr,rotk
Click to expand...

I do want to say about the quote in LotR of the, um, "black men like half-trolls" (from Far Harad), I really prefer to think it is 'just' a very disturbing and unfortunate description of normal, ordinary black people. The hobbits think they look like "half-trolls" just because of their skin color, because the hobbits are terribly ignorant. I very strongly do not want to take it as a literal description of where black African humans come from.

Anyway, Haerangil, would you please consider giving some indication of where you got the quotes in your first post? It's very difficult to use them if we have no idea where they came from, if they were ever published, or when they were written -- especially since they all contradict each other..
Last edited: Jan 9, 2019

All thoughout the home series i fear... i used full text search so i can't restore the exact pages for the quotes. However i don't think thats important, as the hobbit and lotr quotes are those we think of as canonical while the rest just illustrate ideas in process (and never fully finished).

I agree about the Quote about troll-men, it is not mean intended but it takes the perspective of the hobbits naivity so it comes about quite a bit racist (but then again it is a hobbits perspective to whom even breemen seem strange enough). I still think the quote is interesting because i think it shows that at least some trolls reminded the hobbits of big and muscular humans.

The "Half-Trolls" might be men who has made an effort to look savage and scary, like some modern gang-members do with facial tattoos. Real half-trolls live in Norway. Have just finished "Egil Skallagrimson's Saga", and Egil's grandfather Kveldulf's maternal uncle was known as Hallbjørn Half-Troll.

An influence on Tolkien might be Theodor Kittelsen (1857-1914), the Norwegian artist who often is given the credit for creating the modern Norwegian image of trolls. A couple of Kittelsen's images: 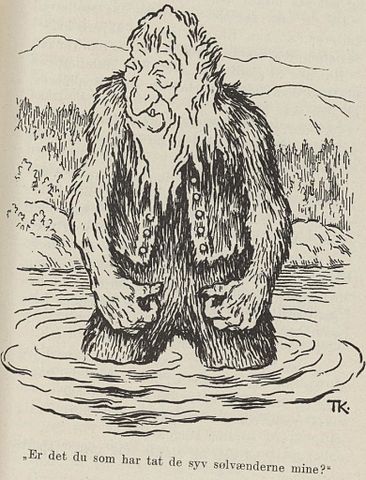 It may be an indication that the Haradrim were tall or tattooed, yeah. Or that some Trolls are black or brown instead of green (I imagine some being grey, too).

Ooh, what technology is this? I downloaded an Adobe Reader extension that makes .pdfs searchable by Windows Search but it's hopelessly limited. It doesn't return the actual search results, just a list of which .pdfs have it somewhere in them.

Hmm... really? Well i have an older adobe version and it has a well working full text search..
But not every type of pdf is searchable.many of my scanned MERP stuff for example wasnt, and i ad to run an OCR before
h
F