Utumno and surroundings (Including Angband)

Staff member
I found these pictures of a place in Iceland called Laki, or Lakagigar (Craters of Laki), and thought of Utumno and Angband. For Angband (or actually Thangorodrim, which is what is visible from the outside) I guess we can't use true natural formations, unless we can find three great volcanoes next to each other somewhere. Utumno is going to be artwork, I guess.
But here are some pictures that might be used as surroundings. 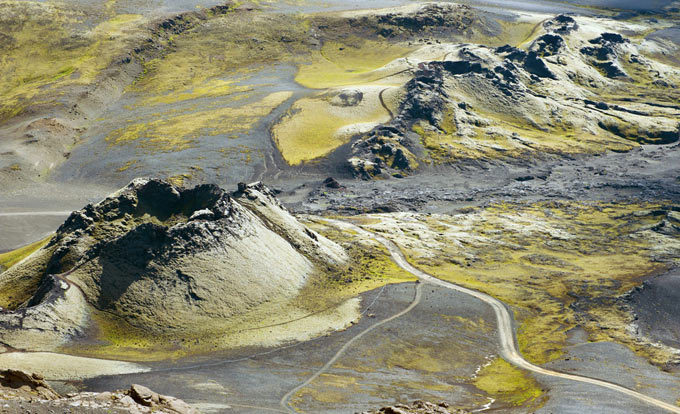 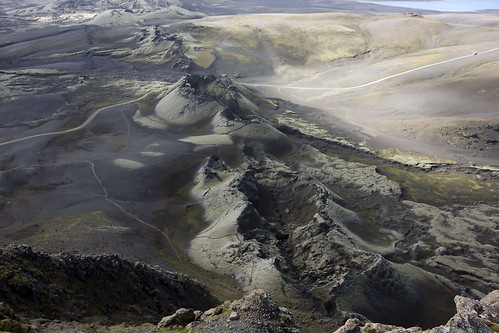 This valley formation looks like it could work well as the entrance to Angband, with the Thangorodrim composited in above.

Staff member
Perhaps though we need to combine these images with some higher peaks... The Iron Mountains should be rather high.


Tim_Widman said:
This valley formation looks like it could work well as the entrance to Angband, with the Thangorodrim composited in above.
Click to expand...

Yes but perhaps we need to see three cones more clearly. And they should be next to the Ered Engrin range. By the way, do we have Thangorodrim this season already or not until season 2?

I meant just the long valley portion as the approach. We'll obviously need to draw from many mountain ranges to create a composite landscape.

I don't recall if the Thangorodrim exist at this point...I want to say they are thrown up later, after Melkor is released.

Staff member
Yes, I think they will be something for season three, actually. Or at least s2.

Staff member
Part of Utumno is of course just subterranean, maybe most of it, with a palace of ice and obsidian on the surface, like an architectural version of a mask. Or like Melkor started with that, with the beautiful, but couldn't help but delve down and expand into the darkness below, further and further.
Last edited: Feb 16, 2016

It may be interesting to make a visual reference to the glittering caves of Aglarond. Only on a larger, more controlled and artificial level (IE Melkor would not care about 'cultivating the stone').

Staff member
Yes. It should really be on a large scale... I think that although it is destroyed by the Valar in s1, they probably just destroy the first levels, and then just seal it off. There will be lots of dark tunnels remaining deep below the surface.

That is implied as the source of much of Melkor's armies when he returns.

Staff member
I am totally in favor of using locations in Iceland. I have seen two films that did that, and it was by far the visual highlight of those (otherwise fairly awful) films: Thor 2 and Noah. There is something both stark and surreal about the landscape that just screams 'otherworldly location.'

For Utumno, I want to see fire and ice. Like, it looks like an ice palace with fire in the walls. As far is architectural style - Melkor is all about the ostentation associated with Baroque, or, the elaborately overdone Rococo. Obviously, I am not a fan of these architectural styles, even if St. Peter's basilica is a rather impressively awesome work. But they work to dwarf those who enter them, which is what Morgoth wants - imposing style that, at this point, can still be considered beautiful..

As an architect who's studied architectural history and theory in Rome and been to many baroque and rococo buildings, I would disagree. I find these types of buildings, if seen in photos or from a certain point of view (St. Peter's looking from above in the dome) they are very visibly huge. However, since they are built around the proportions of the human body specifically, I've often found them to feel much smaller and more intimate when you're actually in them.

To me, though, I'd think of Melkor's style (in scale as well as intention) being more like Fascist Italy's monumental structures: referring to the architectural forms of the Renaissance, Classical Rome/Greece, but largely breaking their rules of proportion in order to create bombastic and overblown forms.

In the sense of ornamentation, Baroque and Rococo might work, I don't know how Melkor might feel about such things (personally, I'd think he'd be a minimalist). In terms of theory, however, both would work fairly well as the form and decoration are meant to create sense of awe...of the sublime and a sense of something greater and outside oneself. I can see this easily be perverted by Melkor for his use and self aggrandizement.

Tim_Widman said:
To me, though, I'd think of Melkor's style (in scale as well as intention) being more like Fascist Italy's monumental structures: referring to the architectural forms of the Renaissance, Classical Rome/Greece, but largely breaking their rules of proportion in order to create bombastic and overblown forms.
Click to expand...

That makes me remember that Stalin (I think) made plans for a building with a dome large enough to have clouds in it.

Staff member
I do have to admit to being an engineer, not an architect. My Mom was an architect, though, so I can say things like 'negative space' and 'iterates' and pretend I know what I'm talking about Just kidding, I will bow to your experience on this one.

But I have actually been in St. Peter's (and attended Easter Vigil mass w/ Pope John Paul II in 2003). I had to stand on tiptoe to dip my hand in the holy water font....which was a shell held by a giant cherub. When the little baby angels totally dwarf you, I have to imagine the effect is intentional! Don't get me wrong - St. Peter's is lovely. But it is MASSIVE as well, and a proximate cause of the Protestant Reformation, soooooooo.......


Is Fascist Italy responsible for the Wedding Cake state building in Rome? Because that thing is certainly ugly! Melkor might devolve to something like that, but at first, with Utumno, we want it to be objectively beautiful, not fundamentally twisted.

Individual elements of St. Peter's definitely are oversized. But in general, I've always been shocked how small the overall space feels as a whole, even knowing down to actual dimensions how huge it is. The overarching proportions that determine the form do this, and relate the huge to the human. That being said, that's the theory, and my experience....that doesn't mean others don't feel differently. Another good example of large feeling small (even very small) is the Pantheon.

There is good and 'tasteful' Fascist architecture, and there's bad, just as in any era. I'm thinking more about the EUR, and the buildings up near the Ara Pacis and the tomb of Augustus.

Staff member
Do you have some pictures of buildings that give some idea of what you want Utumno to look like?

Another possible source to look at would be Albert Speer's design for Berlin for Hitler...particularly the ridiculously huge Volkshalle.

In terms of massive scale look no further than the theoretical buildings of Etienne-Louis Boullée. If you do a quick google image search of his works, you'll find they're hopelessly and oppressively huge.

Haakon said:
Do you have some pictures of buildings that give some idea of what you want Utumno to look like?
Click to expand...

I'll post a few once I'm on my laptop.

Some examples of Boulee's work...all of it theoretical...shared more to give you a sense of crazy scale and proportion. Nazi interpretation of Classicism, primarily driven by Albert Speer, with direct oversight by Hitler. I'm not showing these to attempt an allegorical reference, just that they fit the scale and monumental character I think Melkor would go for. It is also an architectural style which pares down the ornament in favor of form, scale, pattern and rhythm. I don't think of Melkor as a being a fussy designer. 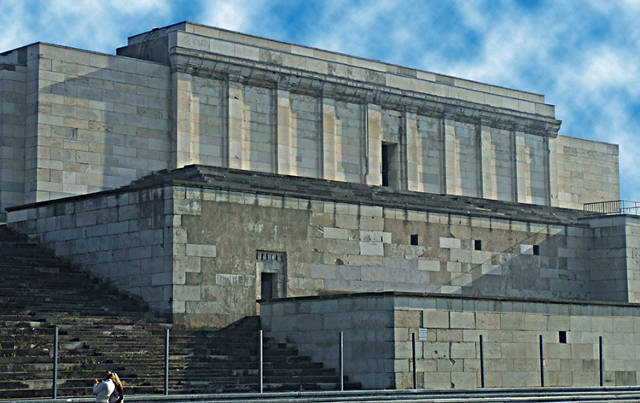 This last I think really gets at the sort of interior I could see in Utumno, though I think I'd go with a more pearlescent white stone, maybe mixed with some black basalt. Given the character of Melkor in our adaptation, reinforcing his claim to be 'lord of light,' the materials he uses (at least at first) seem like they should be luminous or reflective. 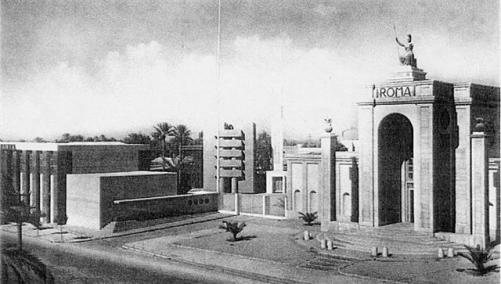 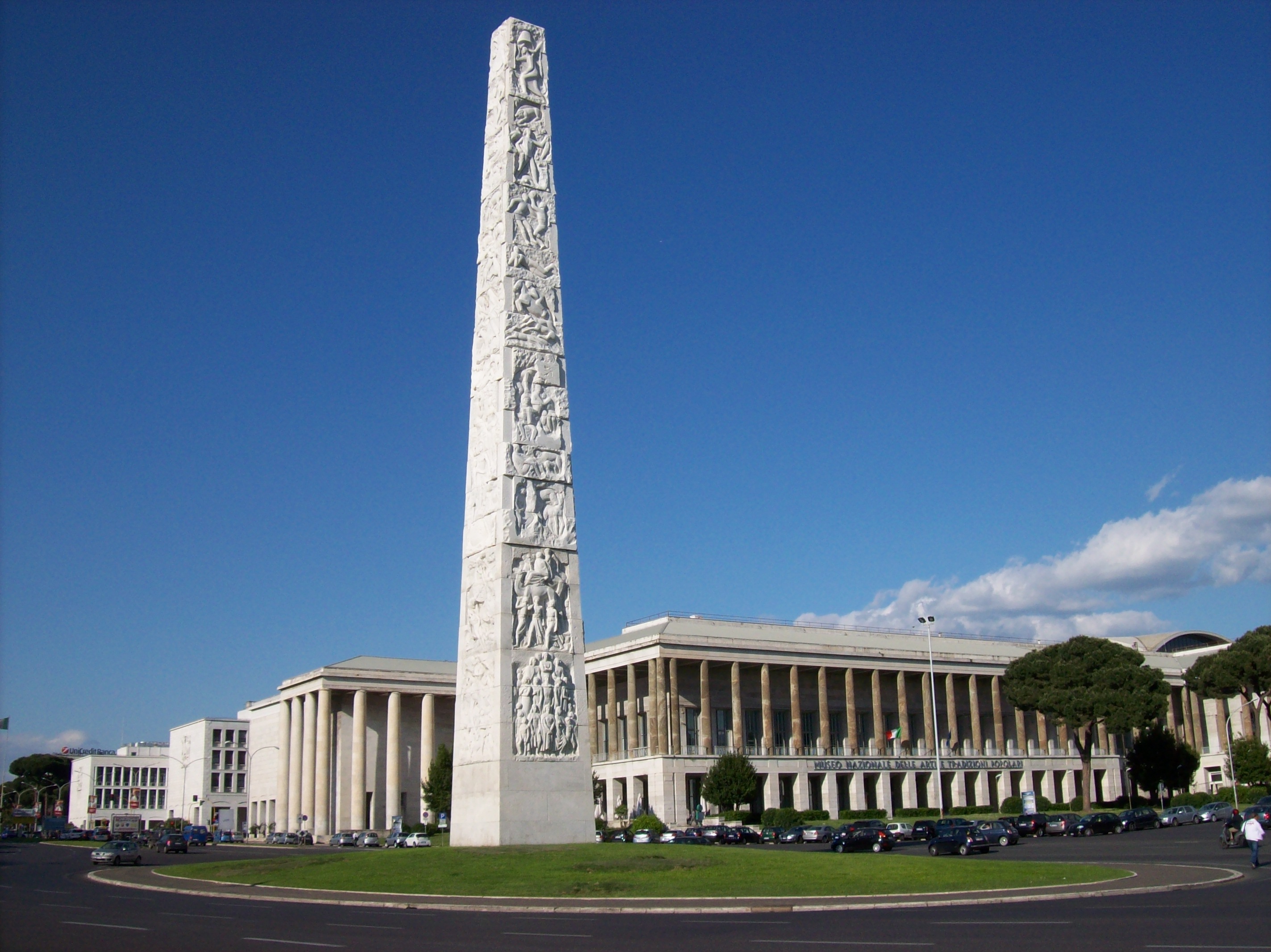