Staff member
Like with any project, it helps to look at examples of how other people have done the same thing, to get a feel for how to construct whatever it is you are trying to make. In this case...scripts for a television show. Fortunately, there are examples out there that have been made public, so comparing a script to a completed project is possible.

I thought it might be helpful to link to some scripts from actual episodes of television, so that we can see what instructions in the script result in the directors, actors, sets, etc making things appear a certain way in the final product. What information needs to be conveyed at the level of the script?

Here are the shooting scripts for HBO's Chernobyl, written by Craig Mazin:

Five hour-long episodes of television telling the story of a historical drama. I figured that was relevant to what we are doing here!


Certain aspects of the story are strongly embedded in the scripts. For instance, every time a new building location is mentioned, its ugly boxy Soviet architecture is called out. These scripts remind the audience of the setting, and convey the writer's opinions of that setting strongly. The desire to be accurate and to make few attempts at 'prettying up' things was clear...so that in the final episode, when the opening shows the 'before' of Pripyat, we are allowed to see the contrast of what this location looks like on a sunny spring day - *now* it is allowed to be pretty, focus on the flowers, a place famous for being deserted shown full of life.

Details of the time/place - thick-rimmed glasses, Volga vehicles, etc - are often included. We obviously aren't setting our story in the 1980's Ukraine, but details of what makes something First Age elvish do need to be conveyed at the level of the script. We are creating cultures from scratch, and while every detail of that culture needn't be listed out, we do need to include relevant details that will make the scene feel uniquely elvish.

Recall the 'departure from Rivendell' scene from the Fellowship of the Ring. Remember these background elves? We know they are elves because they are in Rivendell. The director apparently told them to appear serious/solemn. But, when watching the scene, do you get any sense of what sort of people they are? Or are they just...background set dressing? Is there anything...elvish...about them?

Contrast this with Orlando Bloom's performance. He was obviously given a lot more instruction than 'stand up straight and look serious' when directed on how to be an elf. He made a lot of choices related to movement that were designed to make his character appear 'other' - lithe and graceful and not quite human, but also confused by some basic human things. I have a lot of issues with how Peter Jackson chose to depict 'elves', but I think Legolas is on the whole a well-realized elvish character. The Rivendell extras...not so much. (I realize that they were not given anything to do but stand there solemnly...but that's my point.) Considering how Hobbiton and the hobbit background extras were introduced, I think the elves of Rivendell could have been handled a bit differently.

Obviously, you can't put everything it means to be an elf into a one-sentence description of background characters. But you can be intentional in what details you include when you introduce a new character or location to help the reader dive into the right 'feel' for the scene. Some examples from the Chernobyl scripts:

This is a new character introduced in Episode 2 (she did not appear in Episode 1). There is dialogue prior to this sequence, but here is where we learn who she is. She very quickly figures out what has set off the radiation detector in her lab when a colleague opens the window. The description here leads us to expect her to be quite decisive and to the point, quick to ferret out what is going on. And, of course, she comes across as a knowledgeable and competent researcher. That is all conveyed very quickly. (The iodine tablets will be explained later, and obviously she's going to reveal the results...but the script is very careful to point out at what moment she knows the information, versus when the audience finds out.)

You can see some changes between the script and the final scene - the classical music has been deleted so that we just get poetry on the radio. And she gets out the iodine tablets not immediately, but after she confirms it is radioactive iodine that set off the dosimeter (a more sensible time to reach that decision). We do not hear the dialogue on the other end of the phone line clearly. Her colleague's role in this scene is to provide conjecture. Her role is to take actions that will provide answers. That clear differentiation between them is present in the script, and they act accordingly.

Similarly, it's very clear what sort of people the miners are when they are introduced in Episode 3:

The details of them being 'like a gang on their way to a rumble' are there to convey quickly to anyone reading the script what type of people these are. They are going to show a united front against whatever is coming. They're not actually a gang, and this is not actually a fight, but....they are tough men on their own turf, and that comparison was a quick way to establish that it's going to be difficult to order these men around. Obviously, a guy who has car doors opened for him has no chance of that (even if accompanied by military troops).

Almost every detail conveyed is significant for setting the scene - the coal dust falling like snow on the vehicles, the pale blue suit in contrast to the dirty coal miners, the Soviet flag showing that this is official government business, the miner spitting to show his displeasure.

Here's the scene in the show. The editing intercuts the arrival of the cars with the introduction of the miners from earlier in the scene. And a line of dialogue is cut, so that only a look between the spokesman and the other miner is needed, keeping the tension of the miners' decision up in the air until Glukhov approaches Shadov. I don't see the Soviet flag, so if it's there, it's subtle (he has a pin on his suit). Obviously, the final version does not follow the shooting script exactly. But the key elements convey what the script called for.


At any rate, there is a lot that can be said of these scripts, and how they tell the story they set out to tell. I think that they are high quality (despite a few typos!), and consider them worth studying.

Staff member
And you had to know I was going to bring Supernatural into this, just because

The pilot episode of Supernatural is a well-written introduction to a show. It has a few weak spots, but for the most part, a lot of thought and care was put into constructing a serial horror story about young adult brothers driving around the country fighting monsters. The same cannot be said for an early draft of the pilot episode script. There were many wince-worthy moments in this that failed to convey what the writer was obviously hoping to convey. But even in the early draft, certain details that were clearly important to the writer shone through.

For instance, there is this passage:

Even from this early version, Dean drives his dad's old car and listens to his dad's rock music. Obviously, the guy writing the script likes muscle cars and 70's rock. And we are clearly meant to think that Dean is very cool for driving this car, playing this music, smoking cigarettes, and drinking Jim Beam (other details from this version of the pilot, not all of which survive to the final version). In this early draft - their last name isn't Winchester, and they weren't raised as hunters. Their mom definitely died due to something supernatural, but when Sam was 9 and Dean was 13, not when they were little. They were raised by an aunt and uncle who no longer exist in the actual show. (Note: While Dean certainly talks about listening to Led Zeppelin on the show, no actual Led Zeppelin songs appear in the soundtrack. Copyright makes that a very expensive choice. Just ask the team behind Thor: Ragnarok).

It is not clear to me how early this version of the Pilot is, but I can say that it was after the show was pitched to the WB in 2004 - Kripke was originally trying to do a show with a reporter tracking down urban legends all over the country, but had to switch it to two brothers on a road trip when the studio didn't like the reporter idea. The reporter character would have had a '64 Ford Mustang, not a Chevy Impala. Though in this version, it's '65, not the '67 it would become on the show. [Kripke has mentioned that he changed it from a Mustang to an Impala when his neighbor (who restored old cars) informed him that you could fit a body in the trunk of an Impala. Something that the show has made very little use of!] There are a few details from this that will survive to the final version of the pilot as filmed - Dean's comment that Jessica is out of Sam's league, and Sam's sputtering over how stupid Dean was to shoot at a ghost with bullets. Sam having some connection/insight about the thing that killed their mother. Many of the characters' names are in place. And Constance's repeated mournful "I can never go home." But the story told by this pilot draft is almost unrecognizable.

By the time the pilot was greenlit and they were casting, the script looked very different:

They're still Harrisons, not Winchesters, and a lot of details that will make it into the final version of the pilot are not here yet - the dad wears 'Navy whites' in a wedding photo, not a 'USMC t-shirt' in the present. But now the story is taking the shape of the story it would become. A lot of dialogue will change substantially, but the scenes are now matching what each scene will be. The characters and relationships and conflicts are settling into place. The 'case' is changed only a little from the original (the cars being found in a cornfield is a new detail, which will disappear), and will change a lot more before the end (the bridge and the 'woman in white' motive are not here, and the brothers are still separated by the planned prison visit, not the unplanned arrest).

Here is the production script: 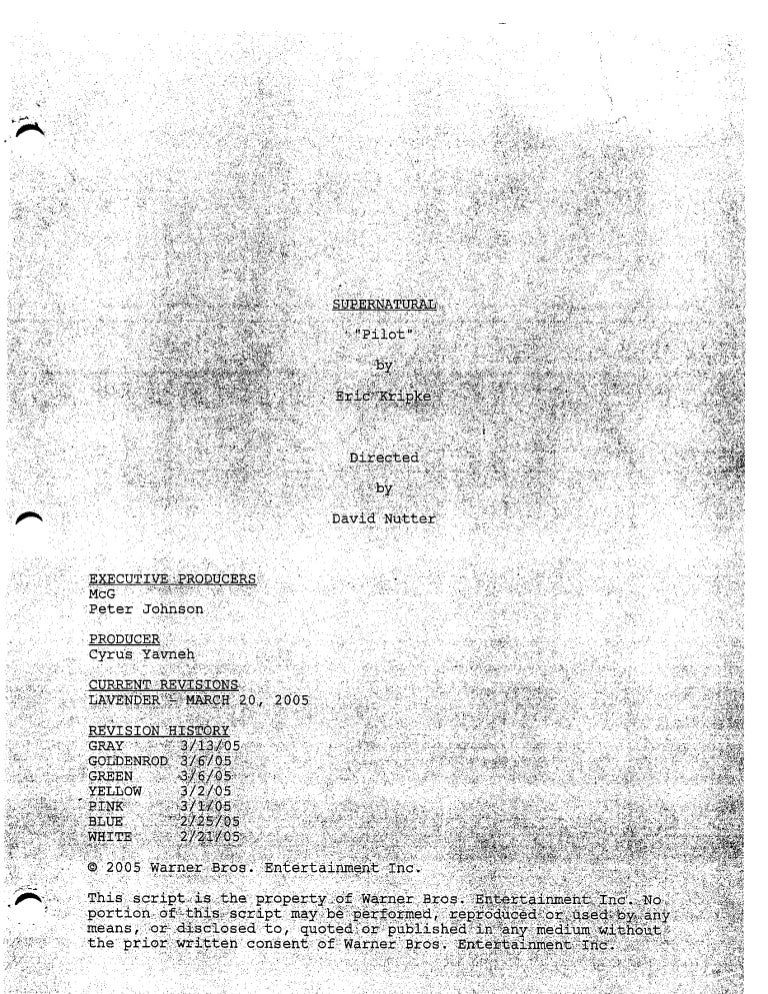 www.slideshare.net
Now, it's very recognizable from what we see in the show. Only minor differences between what the script calls for, and what was shown. And that idea from before, about Dean and his car and his music? It's still there, but now it's integrated into the script, with Dean and Sam commenting on it, not the writer.

...cue Sam being forced to listen to his brother's music for the next 15 years straight But seriously, this is much better than the original version of 'look at this cool dude being cool!' This is 'look at these two brothers ribbing one another' - much more compelling television and some character development...which conversely happens when someone mocks the 'cool' character for the very trait that is supposed to make him cool.