Tolkien's stories about Middle-earth are as a rule mostly serious, with humor mainly provided by hobbits.

Fans have of course made many memes, silly videos, and other jokes and humor surrounding Middle-earth. Personally I'm less interested in memes and more in those that are more involved -- especially those not involving the movies or hobbits, since most Middle-earth jokes revolve around one or the other.

But what are your favorite Arda or Middle-earth humor that you've seen? Share some! (please attribute the artists/authors.) Here are three I found while browsing fanart at DeviantArt.com and really liked, in order from third to most favorite: It gets bonus points for including Elrond (one of my favorite characters) and being something that could, plausibly, actually have happened:

Congratulations, Estel. You have learned: swear words. You are now ready to become a teenager.
Last edited: Feb 16, 2018

There's just tons and tons of fan fiction. . . I know you said "not hobbits" but this is kinda funny. "Written" by Boromir:

The Care and Feeding of Hobbits
http://www.storiesofarda.com/chapterlistview.asp?SID=221
F

That was a good story, thanks for sharing.

Like the fanfic, this (probably) isn't primarily humor, but it's Finrod (I love how bright and shiny he is), it's adorable, and it cracks me up: Now we know the real reason he got that name.

Actually, the more I read Tolkien, the more I notice little things that I have to think are intentional jokes. In particular, in my last reading of The Return of the King, the exchanges between Aragorn, Gandalf, Ioreth, and the herb-master struck me as hilarious! There's certainly drama, too, but much of it is undercut by the over-the-top obliviousness of Ioreth and the herb-master.

Maybe it's just my own tendency to read things ironically, but I really can't think that Tolkien was blind to the humor of such passages. And as with Gandalf's "Good morning" passage in The Hobbit, I wonder if Tolkien isn't poking just a little fun at scholars who get so interested in an issue that they forget the broader context of why the issue came up in the first place.
F

You're right, I forgot Ioreth. She is 90% comic relief.

There are a few other non-hobbit examples. Elrond and Legolas each tells one joke that I know of, in LotR. Haleth even tells what might, possibly be a joke at Thingol's expense in the Silmarillion!

Faelivrin said:
Haleth even tells what might, possibly be a joke at Thingol's expense in the Silmarillion!
Click to expand...

I guess you must mean this, where Haleth is responding to Thingol's message (given to her by Finrod) that her people had leave to stay in Brethil, on the condition that they guard the Crossings of Teiglin and prevent Orcs from entering the wood:


Silmarillion said:
'Where are Haldad my father, and Haldar my brother? If the King of Doriath fears a friendship between Haleth and those who have devoured her kin, then the thoughts of the Eldar are strange to Men.’
Click to expand...

I wonder: it seems possible that she means "devoured" quite literally (remember the remains Sam found in Ithilien of human-looking bones in an old campfire). The last part is not quite a joke, because she means it in angry earnest, but OTOH it is actually quite true: the thoughts of the Eldar are strange to Men ("see" Prof Olsen's discussion in ep. 48 of Exploring the Lord of the Rings on the issues of "diversity" in Middle-Earth culture). It's not quite a joke, but it's not really irony, either. Not sure what to call it.

But WRT Ioreth and the Herb-Master, yes: this is clearly intentional humor on the part of the author. So is all of the "hobbitry", where hobbit friends are ragging on each other all the time. Even Frodo acknowledges humor in the story, near the end of the book where he is discussing their tale with Sam and he emphasizes how children hearing the stories are going to want to hear more about Sam, and "the funny way he talks."

This may be the proper group to ask. I once asked the Professor during a Gryfflet stream about Sam's wondering about his comrades away west while in Shelob's tunnel and waving his arm vaguely, when the narrator feels obliged to point out that he was, in fact, facing south. Professor Olsen seemed to take the view that this joke at Sam's expense was primarily to show how far removed Sam and Frodo are from everything else going on, but I'm not entirely convinced. If the emphasis were merely on Sam not knowing where everyone is (which is thoroughly understandable, given his circumstances), the text could have just said something like, "Sam waved his arm vaguely, though he didn't really know what direction he was facing." The fact that the narrator draws attention to the fact that Sam is actually wrong sounds more like he's making fun of Sam.

My theory is that the author is intentionally using the humor to undermine Sam's moment, somewhat. In the last scene in The Two Towers, Sam had wounded Shelob. In the next scene after this one, Sam will face the Watchers and the Tower, and actually be mistaken for a great, Elven warrior by the orcs! If one weren't careful, one might almost get the impression that Sam is some epic hero rather than simply a faithful servant. By making fun of Sam's mistake, we are brought back to thinking of him as a humble gardener once more. Incidentally, I can't help but feel that in reminding us of this, it helps Sam's awesomeness stand out even more! In humiliating Sam, the narrator helps raise him up!
F

I, personally, found it funny when Sam is mistaken for a terrifying Elvish warrior. Perhaps Sam himself did as well, in retrospect (after the Quest was all over).
F

Ah, I found another one that's worth sharing. This is Annamare/Alystraea's take on Glorfindel and Gandalf reuniting in Middle-earth, after each of them were sent East separately.

"Unfortunately for Gandalf, Glorfindel does not know his own strength." 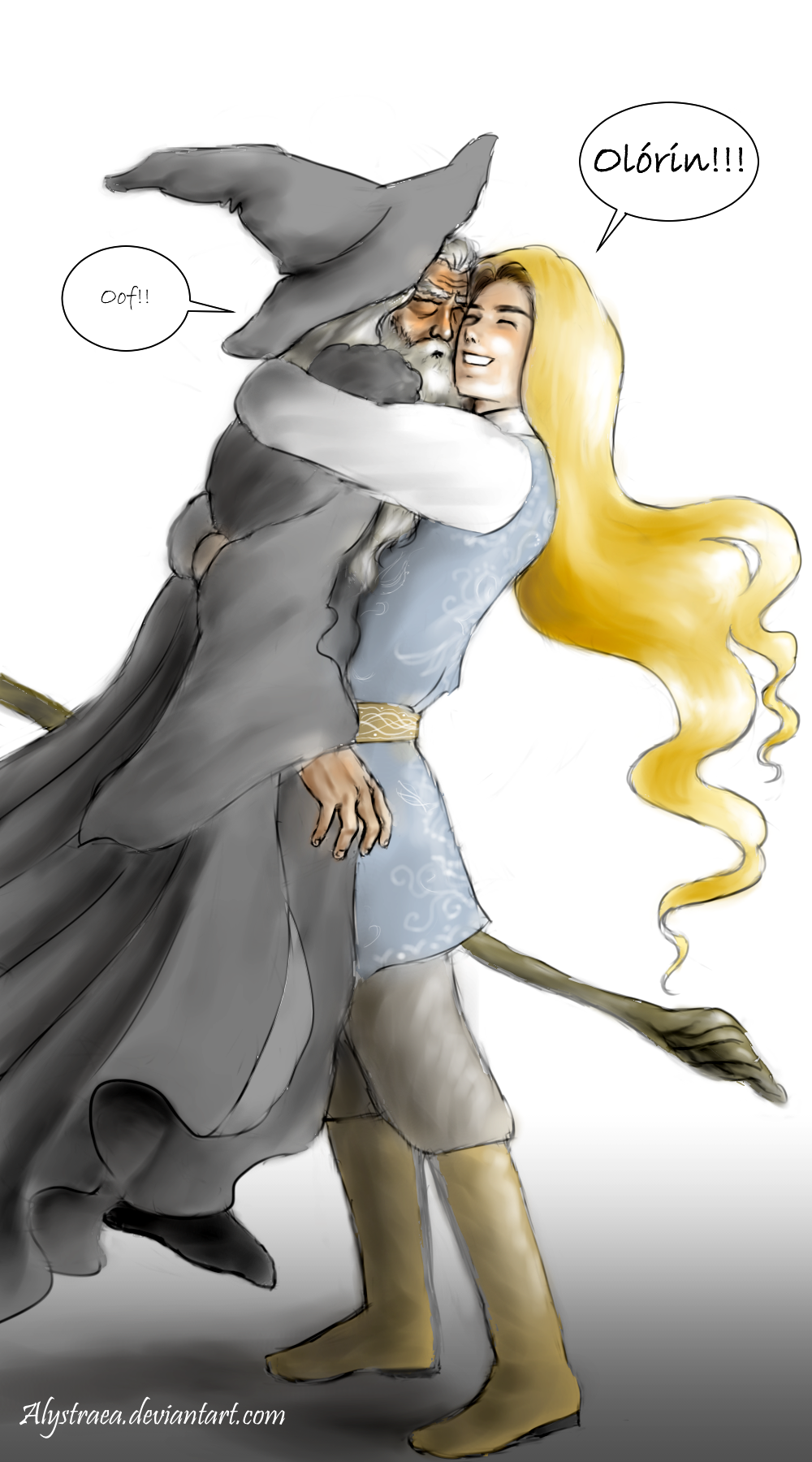 This one is a poke at vegetarians... but it's only Feanorians doing the poking, so don't feel bad if you're a vegetarian.
(same artist as above)
Profanity.

And here's Misconceptions by ScoutDoodles, I won't spoil it:
I really like the facial expressions in this one.
F

I found another good one about Elrond raising children -- this is about the twins visiting Galadriel:

What do you mean Haerangil?

Oh, you mean the fly bothering Feanor in the comic? Excellent.
And now I just realized Feanor in that comic has green eyes. Tolkien never said the color of his eyes... so green eyes of jealousy fit.

By the way, if you look at MirachRavaia's galleries (the "Middle-earth" > "Fun" gallery, whence the Estel comic came from) it's full of hilarity that's making me choke. Including "The One Donut", "Seven Little Feanorians", and the truth about Santa's Elves.
Last edited: Dec 18, 2018
You must log in or register to reply here.
Share:
Facebook Twitter Reddit Pinterest Tumblr WhatsApp Email Link
Top