I think Ecthellion yes should have Orcrist, like remember when Gothmog knocked "Ecthellion's sword" out of his hand then Ecthellion rammed his helmet into Gothmog, what about Sting? possibly Glorfindel I mean look at this picture of Glorfindel fighting the balrog in the Fall of Gondolin, the sword he is holding looks a bit like Sting.

Well, I'd have to point out that it is quite a bit to large to be Sting.

Nicholas Palazzo said:
Well, I'd have to point out that it is quite a bit to large to be Sting.
Click to expand...

Staff member
I think that Sting, while a blade of Gondolin, was not a 'famous' blade of any sort, and merely became famous when Bilbo picked it up. It was likely simply a long knife, and not even named by the elf who wielded it (and you know it takes a special kind of ordinariness for an elf to forget to name something!)

Staff member
Yes, so when we get to Gondolin, we will see hundreds of 'Sting' knives.
B

It's been a while since I've read the Hobbit, but do we actually know that Sting wasn't named by an elf? I know we get the scene in AUJ where Balin (I think) tells Bilbo about swords getting names, but I don't remember such a scene in the book. I would love to see Sting as an Easter Egg in Gondolin as a child's sword (what if it was Earendil's?)

Staff member
Bilbo names Sting after he uses it to kill spiders in Mirkwood.

But, yes, if we wanted to sneak it into Gondolin, I suppose we could...I just want it to be a very *ordinary* item there. So, multiple short swords/long knives laying about, and one of them happens to become Sting later.

Staff member
I think that Sting is a weapon that plays an important role for Bilbo and Frodo, but that it might be wrong to make the weapon important for an important elf in the First Age. It seems fitting that the Hobbits take something of less significance and make great use of it.
Last edited: Jul 26, 2016

Haakon said:
I think that Sting is a weapon that plays an important role for Bilbo and Frodo, but that it might be wrong to make the weapon important for an important elf in the First Age. It seems fitting that the Hobbits take something of less significance and makes great use of it.
Click to expand...

Yes maybe for Earendil's Birthday, Maeglin would forge and give it to Earendil as a gift

We would also need Lady Idril's sword, Hadhafang. Which was also the sword later on of Elrond Half-Elven and Arwen. But we would definetly need Glamdring with Turgon.

TheWitchKing said:
Yes maybe for Earendil's Birthday, Maeglin would forge and give it to Earendil as a gift
Click to expand...

Forged by Maeglin and given to Earendil seems rather the opposite of making the weapon "not important".

Staff member
Agreed - Sting should be a short sword/long knife that is common in Gondolin; we should see *many* examples of what will later become Sting.


TheWitchKing said:
We would also need Lady Idril's sword, Hadhafang. Which was also the sword later on of Elrond Half-Elven and Arwen. But we would definetly need Glamdring with Turgon.
Click to expand...

Keep in mind that this project is making no attempt to maintain continuity with Peter Jackson's films. Thus, Arwen (or Elrond) having Idril's sword is not something that we have to do, and we don't have to choose the same name for it. We do know that Idril had a sword during the flight from Gondolin, so, yes, we will have to include that. But it need not be the same style as the one Elrond uses in Peter Jackson's films.
Last edited: Jul 28, 2016

So.... I've been giving this stone thought in reference to the "first sword" idea that we've been discussing, more specifically the idea of "plowshares into swords". I started thinking, not of plowshares, but of sickles. 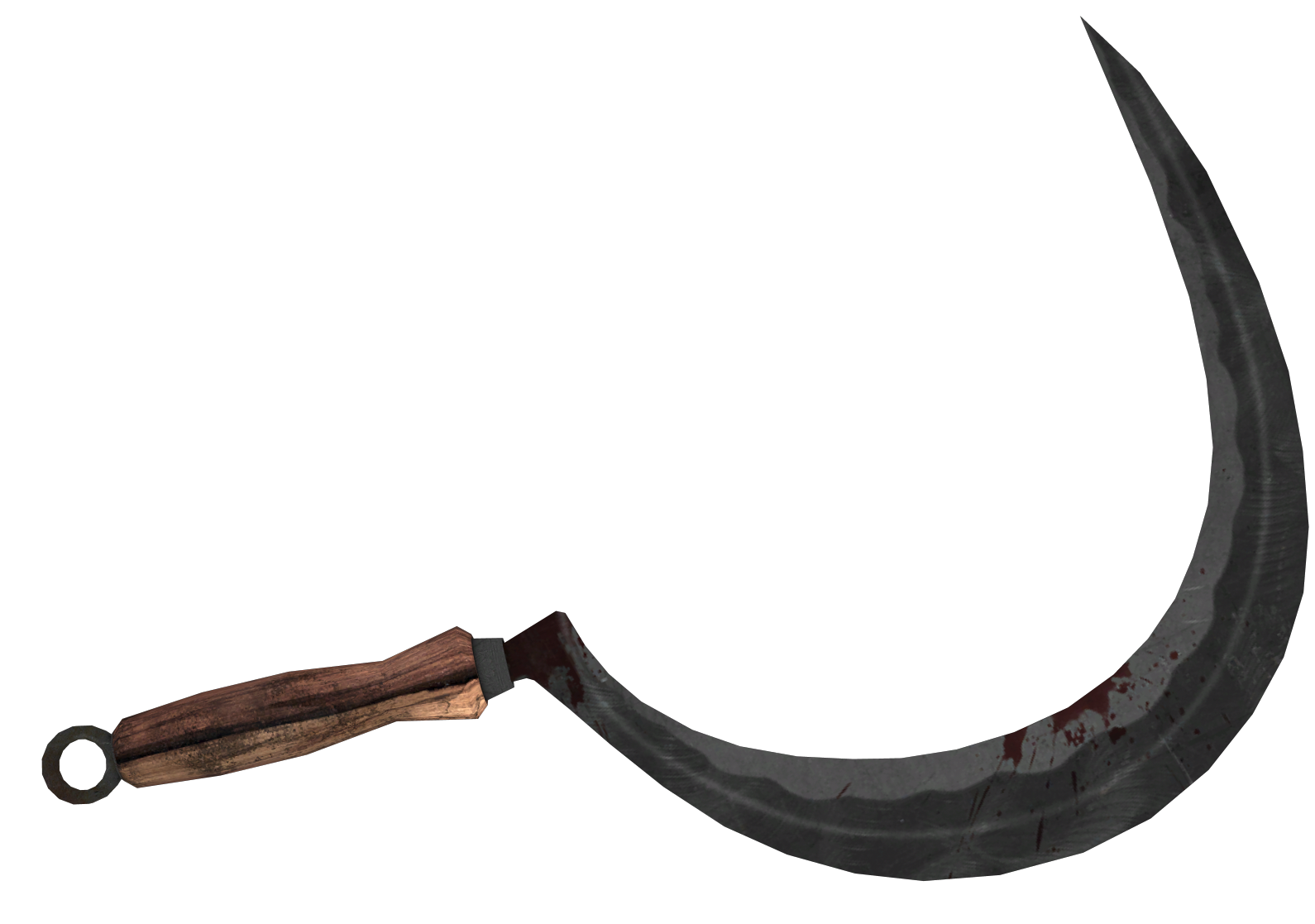 Sickles are blades of a sort which could be forged in time of peace. They also require very little creativity to turn into this: 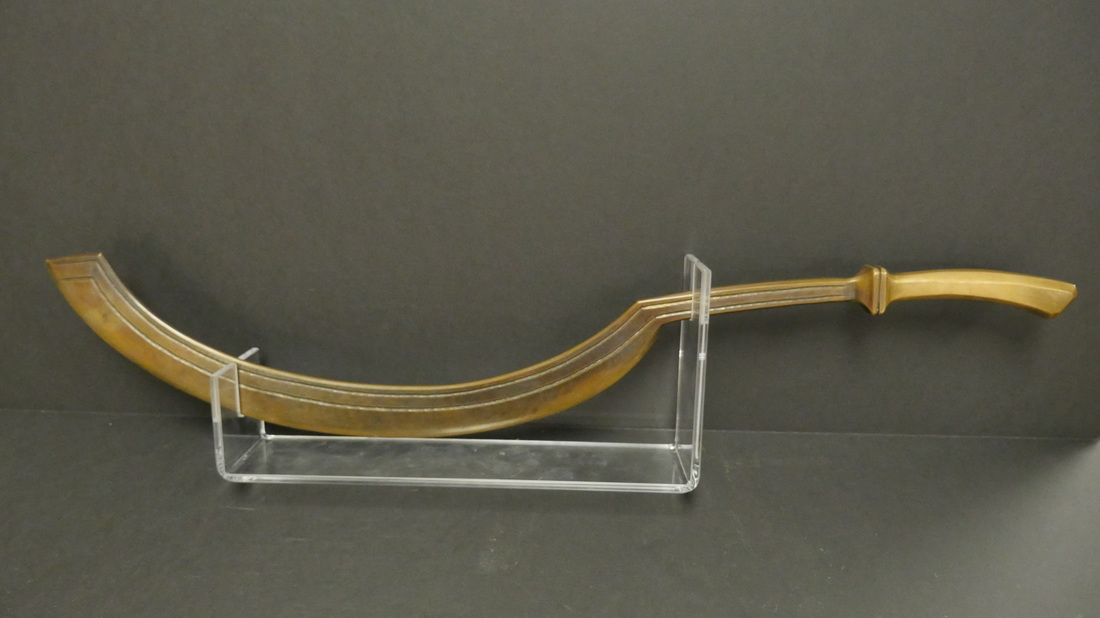 Khopeshes are a very ancient design, certainly appropriate for the first such weapons. Powerful cutting tools, I can easily see them used to cut a swathe through armies of orcs used to the weapons of the Sindar.

They are also exotic-looking without being impractical, and might pair rather well with the four- mirror armor I suggested for the early Noldor.

Staff member
So, I have one of these. It's used by the people in the Afar region of Ethiopia (though nowadays, they sell them to tourists; for practical purposes, today they mostly carry AK's. Did I mention that you don't want to try to steal camels from these guys? You don't.) 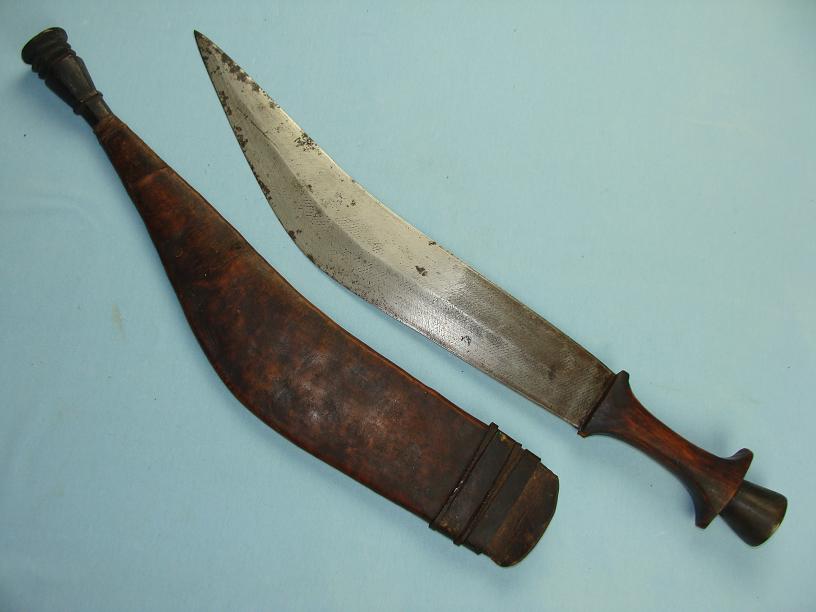 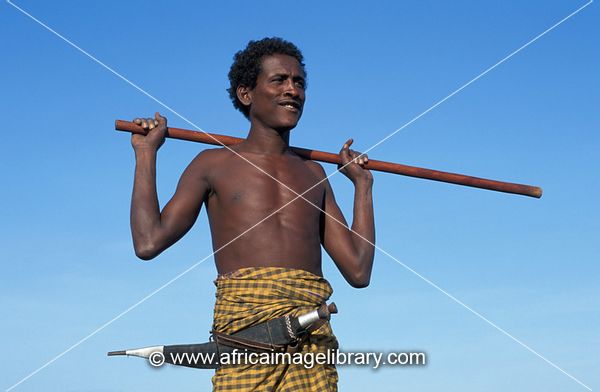 It's a short, light-weight blade, though it does look quite wicked unsheathed and I had an interesting conversation with security at a Spanish train station on account of it.

I use it for my orc costume.

Me...possibly at a place where you're not supposed to wear masks or have real weapons. Oops. Orcs aren't good at following rules. You also probably don't want to know just how many dead animals are used in that costume....

I bring all this up as (obviously) an excuse to show off my orc costume, but also to point out that curved blades have a decidedly wicked look to them (to my mind). I'm having trouble picturing the elves with curved swords.

Staff member
I still think the shape suggested by pdepaolis is good. Kind of like this:

Well, the Xiphos, which I believe is what you have pictured above, Haakon, is indeed a viable option, but was considered in its day to be a secondary weapon, only used once the enemy had closed past spear range, or when a spear was lost or broken. The khopesh, as a earlier weapon, is a much more logical progression from hand tools. People don't make double-edged blades unless they intend to use them on people, and blades of sword length which are straight and double-edged are not easy to make at all. I do agree with Marie that there is a weird perception that curved blades are somehow more evil, despite beautiful curved blades that have been used throughout the centuries, for example:

From a weapons historian's point of view, it would be kind of interesting to see the elves progress from a more ancient blade form to a more "modern" one once they arrive in Beleriand. And, if anyone is concerned about the "evil" look of the khopesh, consider this: it would be the blade used to threaten Fingolfin, and the blade used in the Kinslaying.

Staff member
We could go for the bautiful sabre shape or katana (it is a katana, right?). Perhaps we could avoid the typical japanese handle, though. It doesn't seem like Tolkien.

Nicholas Palazzo said:
People don't make double-edged blades unless they intend to use them on people, and blades of sword length which are straight and double-edged are not easy to make at all
Click to expand...

I was thinking that this is exactly what Fëanor does and that is what makes it such a dramatic development.

It was an odachi, which (usually) has a slightly deeper curve than a (typical) katana due to its longer length. My whole point is that it makes sense for the first sword to use the earliest available forging techniques. It also incorporates the "plowshares into swords" idea that came up during the podcast.

The issue of blade length is also a problem. Shorter swords like the khopesh and xiphos tend to be used by cultures for whom the spear is the primary weapon. A marked deviation from this is the Roman gladius. The Roman legions did not use a "spear" as a primary melee weapon, but a javelin for use as a ranged weapon. The differentiating factor here, I think, is the massive shield carried by the Roman legionary. It allows the soldier to get super-close to the enemy in a close-packed mass with his buddies.

The description of the first battle between the Feanorians and the forces of Morgoth does not seem to support this tactic. The Noldor do not use tried and true military tactics. How could they, as they've never waged war before. They seem to rely heavily on their superior ability and a fear aura effect that comes off them, affecting Morgoth's rank and file troops.

This indicated to me that they carry more individualistic weaponry, such as a longer sword, and perhaps a small shield, smaller than that used by the greek hoplites. Now the khopesh, as typically found, usually tops out at about 60 cm, or about 2 feet. This is due, mostly, to the limitations of bronze. Iron example of the sword did not survive to the present day, though we do know they existed. Iron, or steel weapons would certainly be able to maintain a longer length, even with relatively crude sword-making techniques. The curve allows for a forged bevel on the cutting edge without having to hammer down both sides (which tends to make the metal brittle without advanced techniques). Staff member
I don't agree that Fëanor has to use 'early' techniques. I do like the ploughs to swords idea, though.