Ilmare- the character whose first mention during the Silm Film Project was when somebody said, "Hey. We should probably cast Ilmare too. She'll be around." So many characters. So little time. Alas, Ilmare, we'll hardly know ye! Welp, let's get to castin'. An unknown actress obviously. What famous actress wants to play a character even the makers of the show forgot existed? I was thinking someone who would be similar to but who is not actually...

Keisha Castle-Hughes is only 25 years old but she brings a maturity beyond her years to each role she plays. It's probably the reason she was cast as the Virgin Mary in The Nativity Story (2006) when she was only 15. And that's what an actress cast as Ilmare needs to be- someone young so that she looks like a Maia, but with a visible confidence that can elevate her above her older fellow actors. Ilmare is, after all, the handmaiden to Varda. And the Queen's handmaiden would be very important among her peers. If you're at Buckingham Palace and you have a question, you don't go straight to Elizabeth. You go to William James Robert Peel, 3rd Earl Peel, the current Lord Chamberlain. He's important. People know him. Now imagine good ol' Billy Peel as a 25-year-old Kiwi woman. If you're not picturing Keisha Castle-Hughes then what's wrong with you?

But, if this whole shebang wasn't purely hypothetical, we probably wouldn't be able to get Keisha Castle-Hughes. However, one of Keisha Castle-Hughes first roles was as a throwaway character in Star Wars: Revenge of the Sith. Now, over ten years later, she's in a whole bunch of stuff- she's even an important character on Game of Thrones. We need to find the next 2005-Star-Wars-Keisha-Castle-Hughes. Whoever that girl is, she's my nomination for Ilmare.

Staff member
I nominate Yoo-Jeong Kim. http://www.imdb.com/name/nm2498552/?ref_=nmmd_md_nm
If we're going to have Lucy Liu as Varda and want Ilmarë to look like her, we might want to cast an actress of asian origin. Yoo-Jeong Kim is a young Korean actress, 16 years old, who would be perfect for this. 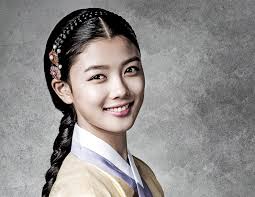