I've created a google presentation of my first pass at story boards for Eps 1 Scene 1.

I've just joined the forum, and I'm still getting caught up on things. So I hope I don't step on anyone's tows with this.

This might help, as it contains the outline we fashioned in our first, epicly long Blab.

I'm going to find the original conversation and post the link. (I didn't host the first one so I don't have it on my YouTube channel.)


I heartily approve of the attempt to storyboard all of this. It's a Herculean task, to be certain.

Staff member
Welcome to the forums Kyle. I must say you have entered with a splash. The story boards are great. Is it OK if I share the link to them on our facebook page? It will reach many more people there. As Nicholas said there is greater refinement of each episode in the Outline Summaries, but beware. These need to pass the executives in a few more sessions before they are given the green light on everything in them. I suppose that is the life of a budding artist. The execs tell you to do it again because "the ocean is just the wrong shade of pink".

Oh yeah, sure you can share it! I'm not terribly worried about anything green light, I'm just trying to show what could be done. I've set it up on a google doc so that other people can add edit and change things as they wish to make it as easy to collaborate as possible. But since you mentioned the green light, is there a place to go to see everything that is green lit by the Three Peas of the Pod? Has anything gotten the green light?

That will probably start to take place after the completion of Season 1. Hopefully they like the general direction of where we're taking things.

Staff member
The only content that has been green lighted is what has been discussed in each session. You may want to tune in to sessions 1.16 and 1.17 (the two latest ones) which cover more production issues (and they won't spoil the story for you). 1.17 has some discussion on the look of Rivendell and some other locations throughout the season which may be useful with your storyboards. The Episode outlines are being looked at by the hosts I think the session after next.

Staff member
Oh, very cool! I very much like this, and am beyond impressed with what you've done here. We haven't reached a point of writing dialogue yet, so your placeholder stuff is as good as anything. I will say that there are a lot of different ways we could do Episode 1, so even though we've worked on an outline for it, there's no guarantee the Execs will like what we've done . Your storyboards do introduce our three main characters relatively quickly, so that is a very positive thing.

Staff member
One thing that these storyboards have really brought out to me is that the way we have structured these stories, Gilraen is fairly often upset/angry/disapproving of things. She's Estel's mom - she loves him dearly and there should be plenty of warm moments between the two of them in the script. But there aren't. It's just her fighting with Elrond about how to parent her son.

I'm not sure how to fix this, but I don't want to introduce her scowling. She can scowl, of course, and scold her boy when he does things he shouldn't do. But...there needs to be more to their relationship than that, and is that the *first* thing we want our audience to see about her? Look how warm and interesting Elrond is in these storyboards - how can we do something like that for Gilraen?

We have mentioned that we want Gilraen to be based on the character of Andreth (the mortal woman who loved Finrod's brother, but, alas, it was not to be). We meet her in the Athrabeth Finrod ah Andreth when she debates philosophy with Finrod - she is an old wise woman of the Edain, but bitter. It is only at the end of the conversation that it is revealed that she had loved an elf, and that her lost love has been the source of much of her bitterness in life. She never understood why he left her.

Gilraen is still young. Sure, she may die in loneliness and (some) bitterness. She does strike me as a rather melancholy person from the brief snippets we've seen of her. Andreth and she have a lot in common...but what of the spirited young Andreth who would reach for the flame and give her love to an elven prince of the Noldor? We should see more of that passion in Gilraen, mingled with sorrow, but not cold and bitter. She's not a helicopter mom, and the conversations with Elrond aren't PTA meetings.

This is Jenny Dolfen's illustration of Andreth, and I would like to see our Gilraen be more like this, if possible! She is thoughtful and smiling and has plenty of spirit.
https://goldseven.wordpress.com/ 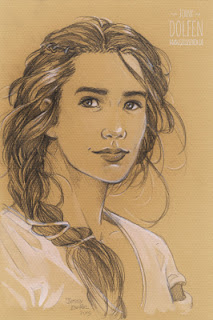 the old storyboard cannot be found anymore, i had even forgotten it actually existed. uploaded something i did...