The Ring of Barahir is a ring originally belonging to King Finrod Felagund. During the Dagor Bragollach, Finrod gave this ring to Barahir Lord of Ladros as a pact of friendship between his house and Finrod. The ring is taken by Gorgol the Butcher, an Orc-Captain under Sauron, until Beren kills Gorgol and recovers the Ring. Beren wears this Ring as proof of his identity when he goes from Doriath to Nargothrond; from there the Ring eventually finds its way to Numenor and becomes an heirloom of the Lords of Anduinië, chief of the Houses of the Faithful of Numenor. The Ring then passes through the generations (with an occasional bump or two) to the leaders of the Kingdom of Arnor and the Dunedain Chieftains until it is given to Elrond of Rivendell, who subsequently gave it to Aragorn when he revealed his identity to him.

The Ring is described as having two serpents with emerald eyes, one devouring, the other crowned with golden flowers. This is the film's version as a starting point, but we'll obviously be doing something different. 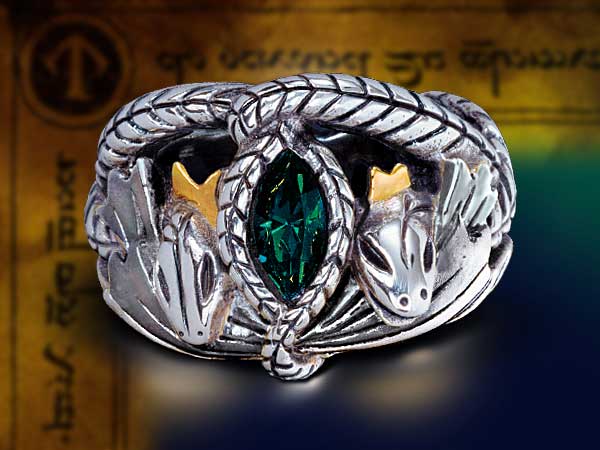