Season 2: Episode 1 - The Awakening of the Elves

He can still be vocal in the councils of the Valar. Just because Tolkien doesn't tell us what he had to say doesn't mean we can't show it.

Staff member
I more meant that Ulmo stays involved in what the elves are doing in Beleriand...whereas Oromë seems to halt his (formerly frequent) visits to that land. So, *something* happens with the rebellion of the Noldor that has a profound significance on Oromë's relationship with the elves. And since we don't hear from him again, it's a bit hard to judge what that might be.

It is possible that the council of the Valar saying 'don't interfere with the Noldor' is something that he takes as a strict prohibition so that no matter what he might want, he will not visit. (Ulmo breaking the rules is a very Ulmo thing, but Oromë obeyed when they let Melkor loose, so....)

It is possible he feels some guilt or responsibility for bringing the elves to Valinor in the first place. The Valar may have agreed on that action, but it was he who went to Middle Earth and made it happen. Maybe he chooses to stay away from Beleriand as a sort of personal penance to atone for his errors.

It is possible he feels personally betrayed. He invited the elves to Valinor to be safe and happy, and now they started a war in Valinor, slaughtering each other. Sure, Melkor was involved, but it seems pretty clear that the elves are to blame for this. If Oromë was friends with the elves, and then his friends did this....he might take it rather hard. We know that Fëanor's son Celegorm was one of his companions in Valinor, and of course the Sons of Fëanor were instigators in the kinslaying at Alqualondë (and all future kinslayings, really).

That's what I meant when I said we don't really know - there's no hint about how Oromë took this, so...we will have to choose ourselves what happens and why.

MithLuin said:
I think it is a powerful image, but I'm not sure where to include it. At this point, I see it coming up as a flashback, perhaps after Melkor is released or during the SuperSecretNecromanticOrcProject in Angband.

I mean I think he could watch them in secret, I don't think Melkor (or Mairon) should interact with the elves by entering the group and talk to them at this point. Maybe they could sneak up to one or two elves and whisper ideas in their heads without being seen.

MithLuin said:
6. First pinch point
Earthquake, lightning, panic. The Teleri are terrified ('The Sky is Falling!'). The Noldor accept their fate (We've had a good run, but it's over now.) The Vanyar have Estel (There's nothing we can do about this, but let's trust it will turn out okay). We have the point of view of young Celeborn (possibly with voiceover).

7.
Early battle. There are very remote sounds and flashes from the battle at Utumno. [The viewer should recognize events such the arrival of Eonwë by lighting bolt from Season 1 Episode 13.] The elves abandon some of their houses and build more defensive (underground?) hideouts.

8. Mid point
Lull, fire across the lake. As time progresses, the battle seems to die down. In the lull, the elves wonder...is it over? And then...it is closer! Fire in the trees across the Lake, sounds of battle.

Act Three
9.
Evacuation to Vanyar island. The elves decide to evacuate to the island of the Vanyar (using simple ferry boats).

10. Second pinch point
Fire in the sky, discussion of abandoning Cuiviénen. [Some run off into the woods, never to be seen again?] They watch the fires spread around the Lake.

11.
The battle's anticlimax. It quiets down. A rainstorm comes up and puts out the fires. There is confusion on the part of the elves....is it really over now? Rebuild and return to life as normal (though still on the Island).
Click to expand...

Perhaps we can use some voiceover on these scenes.

Haakon said:
Perhaps we can use some voiceover on these scenes.
Click to expand...

Yeah, that's kinda what we were thinking.

We still, to my eyes, have some problems with the episode.

I'm still not convinced that our act 4 is ~12 pages worth of gripping script. Points 13 to 15 feel like two points of content (~8 pages) not three. Since we can't really do anything extra given the timeline, should we instead be dropping back to the frame for it's resolution at 13? If we're also wrapping up minor subpolts, that would help to make act 4 feel less sparse.

Staff member
I would like to see Ingwë in a spot where he more or less is considered the leader of his tribe after dealing with the threats of the Hunter and the war (so those parts should show that he takes initiative and inspires the Vanyar).

Well, I can agree with the need to have focus on Elwë. In Act 2, we have the reactions to the arrival of Oromë. Since Elwë's opinion of Oromë is a linchpin of the climax of Act 3, we need to make sure his feelings on the matter are expressed in Act 2.

Perhaps in a private conversation with Ingwë so we can get a better understanding of the Vanyar point of view.

I do think that showing Ingwë at the head of the Vanyar contingent in the first council will illustrate his position in their society.

Nicholas Palazzo said:
I do think that showing Ingwë at the head of the Vanyar contingent in the first council will illustrate his position in their society.
Click to expand...

Yes I agree, but we might push it even further. For instance, what is Ingwë's opinion on this:

MithLuin said:
12. Second plot point
Establish diaspora plan. The elves do not intend to stay in one place, but to explore the many unknown places of the world. They are preparing their boats and having a feast and song to celebrate 'Hey we're still alive!' [This is meant as a farewell feast for the elves who are leaving the island.]
Click to expand...

I think we can add that Elwë could be one of those in favour of the diaspora plan. Ingwë might not be so sure. He might say that they are born here at Cuiviénen, and as long as there is no clear sign that this is the wrong place to be, the best thing might be to stay. He might argue that he has been thinking about the Rider (not the Hunter) and thinks that there's something important about that being. Perhaps Oromë enters in the middle of such a conversation, even. 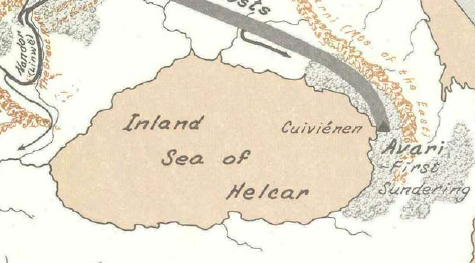 Ok so if the elves live around the eastern shores, where the forests are and the map says 'Avari First Sundering', the fires should be on the western shores, close to the arrow south of where it says 'Nandor'. Or maybe slightly farther to the north, to the west of the two rivers. That could work.

I'm thinking the Vanyar island is where the map says 'Cuiviénen'.

By "fire across the lake" we mean that the elves look across water and see the effects of the battle. I realize that it is a very large lake, but we could easily be in the northeast corner and have the attack come from the north.

Staff member
If the attack is blocked by the Ents (among others?), and we assume that the Nandor encounter the Ents by the Misty Mountains later on, during the Great Journey, that would make sense. - The Ents more or less stay in that area after having fought the battle.

Or spread out through the forests of Middle-Earth.

Staff member
Well yes but initially they seem to have kept together to some extent, at least before the departure of the Entwives - which I think happens later. The elves taught them all to speak, so their diaspora probably happened after they met the elves.

Staff member
We just want to see a progression of the fires getting closer to their location. The battle is very far away; the fires are visible to them and thus much closer, and spread in their direction as the end of the battle progresses.

Man, last page was really awesome. You guys are killin' it in here.

Staff member
Well...sorry of I'm getting into petty details...

Staff member
You know how elves do not marry or have children in times of war? What if that goes all the way back to this first battle at Cuiviénen when they thought the world was going to end?

Something would have to set off the 'this is a bad time' reaction. Perhaps a child could be born with deformities? I know we don't want to have 'sickly' elves - especially not in this first intro of what makes elves elves! But some physical flaw (blindness, or a hand missing fingers or something) could be blamed on the world-shaking going on, and they could conclude that battle is a teratogen to be avoided during pregnancy.

This would tie into the Finwë-Míriel story, as they are engaged, but now does not seem to be a good time to get married. Then he leaves to go to Valinor in episode 2 (tearful goodbye with uncertain future), and we resolve all of this in Episode 3 when he returns from Valinor and they get married (in a time of peace)...and then the great debate that tears the elves apart.
You must log in or register to reply here.
Share:
Facebook Twitter Reddit Pinterest Tumblr WhatsApp Email Link
Top