The perfect combination of wrestler and jolly.​

Bonus: I quickly photoshoped some blond hair on him (worst photoshop job ever; I don't caaaaaare), so now he fits the textual canon:

Yeah, I never actually jumped on that bandwagon. Sorry for being a hater.

Liam Hemsworth has already been nominated by someone else for Eonwe, but I personally think he would be just as good a fit as Tulkas. For starters, he's a spritely young 26 years old. Also, he's blonde (and not the photoshop kind.) The most important trait of Tulkas is that he's a fighter; the paragon of athleticism and competition; Arda's Heracles or Thor.

Why, yes. Yes I did say Thor. It's funny you should mention that I mentioned it, because the actor who plays Tulkas would need to be norse-godishly massive (yes, professional wrestler massive- I'll give Dwayne that one.) Now we all know that Liam Hemsworth at the very least has the genetic capabilities to get to pull it off. And if Hollywood can turn a Ben Affleck into a Batman, they sure as heck can turn this Prince of Thunder into the Champion of the Valar.

[For the record: No, I have no intention of nominating Miley Cyrus for Nessa.]

EDIT: WAS CHOSEN TO PLAY EÖNWË
Last edited by a moderator: Jul 3, 2021

Staff member
Hey, let's make this a family feud!
I nominate Chris Hemsworth!
http://m.imdb.com/name/nm1165110/
He is everything Liam is, but more muscular and a bit more wild.
You know he is Thor. Yes - that is the only reason we shouldn't cast him as Tulkas, since the two gods might seem so similar. But as Tulkas he will have a different style. He won't look the same way, and he won't act the same way. And Tulkas is a god who loves to fight, but Thor is the god of Thunder, which, when you think about it, isn't the same thing.
Well, you know what he looks like but I'll add some pics tomorrow.
Last edited: Mar 22, 2016 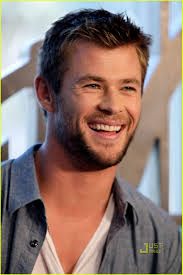 I prefer Hemsworth to the Rock. I think he's much better looking and I'd like for Tulkas to be somewhat hot.

Staff member
The voice has to be a major part for the casting of Tulkas. For that reason I am suggesting a singer, someone who has a really deep resonating voice. My nomination is a relatively unknown Australian baritone opera singer Duncan Rock. He has the physical attributes and he can pull off the blonde hair too.
And he has Rock in his name. You can hear when he talks how deep and loud his voice can be. Unfortunately I could not find a video with him laughing.