For inspiration for Formenos, how about the ancient fortress of Masada? It's, of course, most famous as the last holdout of the Zealots in their revolt against Rome in the first century C.E., but it was in use long before that, and was a mix of fortress and palace, with baths, a library, and all the comforts Herod the Great could ask for. It's a ruin today, but this site offers a plausible reconstruction:http://www.bible-architecture.info/Masada.htm

Again, photos will come when I get home, and no longer have to argue with my work computer.

I started out thinking that Masada was far too large for Formenos until I realized that Feanor had seven sons, and a whole bunch of people who followed him personally. I think it's workable. Maybe a bit more red than we want, but I like the idea...

I'll save you the trouble, because I think the model has more the color scheme I'm talking about.

We can always play with the scale/coloring, of course! But the luxurious palace that doubles as a fortress appeals to me.

And thank for you the photo upload!
H

Masada is a fascinating place, I've been there. I have not listened to the latest podcast yet, but I think it might be a good start for Formenos.

Envy! The Holy Land is definitely on my bucket list.

I do like Nick's suggestion (as I took it) that we go for a grey or whitish color scheme for Formenos. We also could play around with the columns (which are rather distinctively Roman), maybe either making them arches or making them intricately carved.

Staff member
Is Formenos placed on top of a rock like that? Very cool.

Haakon said:
Is Formenos placed on top of a rock like that? Very cool.
Click to expand...

Nicholas Palazzo said:
I think it is now...
Click to expand... Staff member
The only slightly negative thing about that (Formenos on a rock) could be that since Tirion is on a hill, it might seem repetitive to have Formenos placed in a similar way. But I guess that's not a problem.

Haakon said:
The only slightly negative thing about that (Formenos on a rock) could be that since Tirion is on a hill, it might seem repetitive to have Formenos placed in a similar way. But I guess that's not a problem.
Click to expand...

That's easy enough to avoid, if we have Tirion be on a beautiful, lush mountain/hill, and Formenos on a rocky cliff.

Also, we could have Tirion be more colorful in material (colored marble or stone, painting), and Formenos be grey-white and fiercely austere.

Changing my mind from above, but I realized I was throwing terms around on the episode thread that not everyone might be familiar with. Aswan granite is a pinkish granite (with plenty of black in it) found only in particular quarries in southern Egypt.

Porphyry is also historically associated with Egyptian quarries, though it might be found elsewhere. It has a variety of color variations, but the reddish porphyry was the most treasured by the Romans: 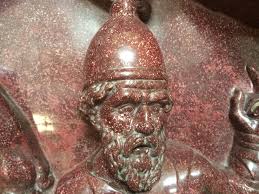 Both are very hard stones, able to be carved and used as structural components such as pillars.

Staff member
That looks perfect, Marielle. If we're looking for a material that signals strength as well as beauty, I think you've found it.

I knew it could only be a matter of time until I bring RPG material into the discussion...

and what i like about the concept is the terraced design and the concept of Jewel- or Gem-form (Diamond-shapes) for Buildings and general concelt.

Of course the difference between this and Formenos is that Ost-in-Edhil is situated in a riverine Valley, while Formenos still should be a mountainous place, though maybe in a river canyon (I think the Sirnumen ran through the place from Kapalinda in the North...).

I'm thinking about running a MERPS game at Mythmoot in June.

Awww... I really, really want to go, but I don't know where I'll be living, or if I'll have a full time job, in June!

Unfortunately i'm european and won't be able to attend to Mythmoot. Sad, i haven't played MERP for Ages...