Staff member
So Skype MERP game at Mythmoot, then?


Basically just tacking on that there need to be 8-pointed stars everywhere in the decorative motifs of Formenos. I know my personal view is very skewed and biased, but I want to see 8-pointed stars and don't even care about the architecture 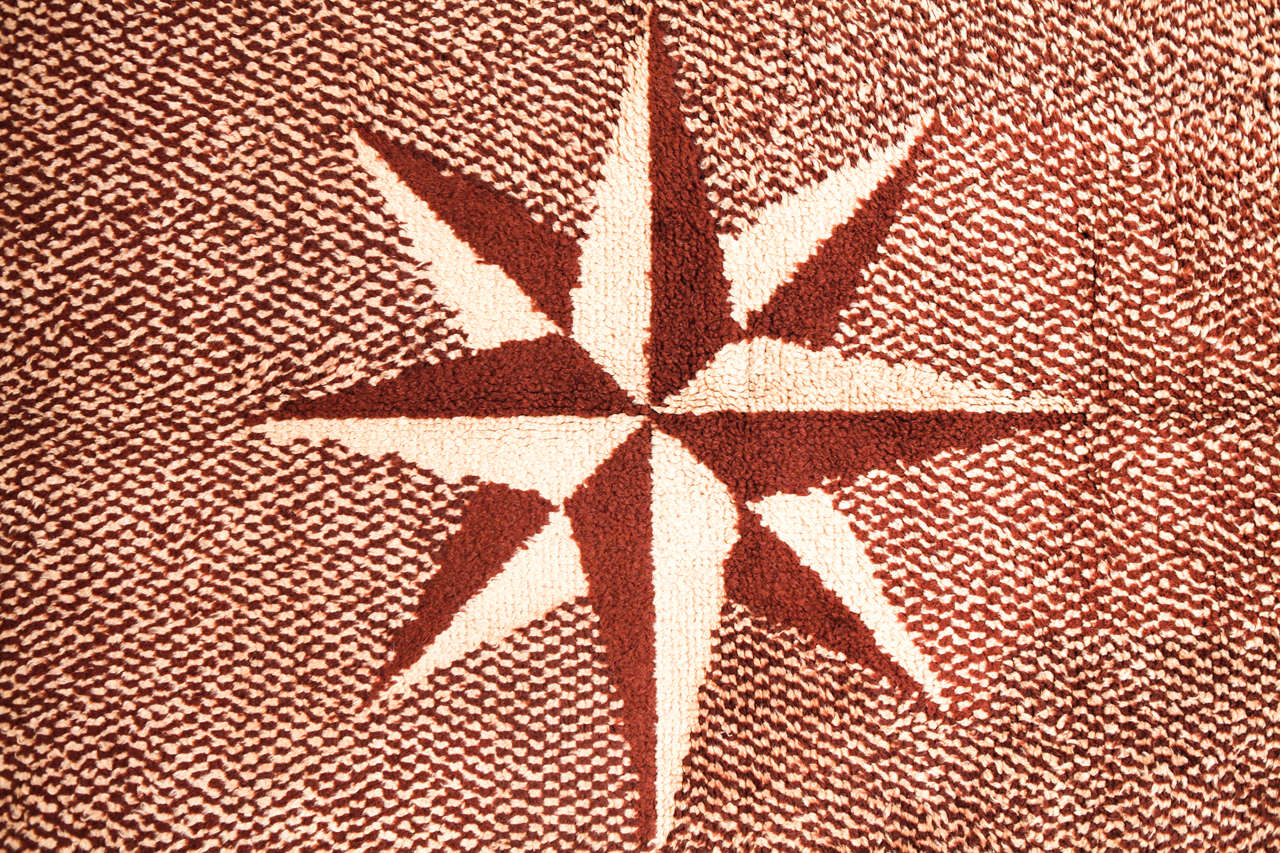 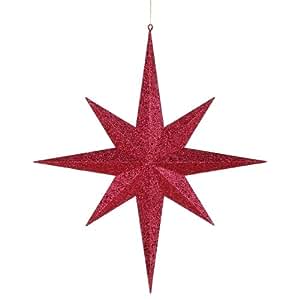 do you know tolkien's sigil designs?

Staff member
Why yes....yes I do

But yes, I agree that was a monstrous oversight on our part; of course Formenos should have the eight-pointed star as a constant motif. The second image MithLuin provided would work quite well as a tile floor pattern, maybe repeated in a straight line from the main gate to some significant place (whatever the equivalent of Feanor's "seat" would be in Formenos)

Also, those last ones, the 3-d ones of metal and (I'm assuming?) glass? That sounds like something little Celebrimbor could make under grandpa's supervision for practice. His mini-Silmarils, if you would.

MithLuin said:
So Skype MERP game at Mythmoot, then?
Click to expand...

I'd be willing, but the time zone thing might bite us.

Staff member
I've been doing some basic research into Iron Age hillforts to try to get an idea of what a basic, early-style enclosure would look like. (Also I thought that was a really pretentious way of saying, 'so, there's these videos on YouTube....')

One thing that strikes me about the designs is that they tend to be very....open. Lots of space for outdoor activities, grazing animals, etc. Sure, there are buildings, and there's an elaborately planned gateway structure. But...it's not 'castle = keep + walls' at all.

Now that stuff is all really old, and wood rots, so there's a lot of guesswork that goes into what was actually built. The earth-moving is the most enduring, and there's pottery fragments. But if these are going to be the first defensive walls to go up....Formenos should be somewhat reminiscent of primitive hillforts, even if the craftsmanship is really advanced. Maybe?

Swedish (though rebuilt later, so not really an iron age example):

I am happy to have the Noldor work in stone, as that seems to be their favorite, and they have experience now. We don't have to make them primitive, not while building Formenos. I don't dislike Masada - I think it's a great starting point! But....maybe give them some more land and outdoor space to work with? Of course, if we want them to seem cramped/trapped in there....it's a balance. But the courtyard should be large enough to practice troop maneuvers for Fëanor's entire force.

And I know we can't have anything as elaborate as this:

I think that your point about open spaces is a good one... and, considering that Formenos is not in the Judaean Desert, creating shade from the sun wouldn't be one of Feanor's primary concerns!

Feanor is getting worried he might have to repel an assault from the Valar. He knows that some of the Ainur can fly, so thus having large open spaces where flying creatures can land/mess with defending troops would be something to avoid.

Good point. We could still have open spaces, but those should be able to be "cut off" as it were, from the interior. I don't know... after Marie mentioned opened spaces, I thought of a central, 8-point star shaped courtyard, and I really like that. If we have all the doors into the courtyard be heavy/solid/defensible...?

We could even have the ability to shut gates for each "arm" of the star, giving us nine separate "wards" which is always a good thing for defense.

I like this for the fortified and rather unique gate (bottom center) and the way that you can see anyone coming for miles. And there aren't a lot of open spaces for flying beings to land.

As you requested, not much open space but many small terraces. Also all buildings are flat and have flat roofs that are accessible , so this place can easily be defended from Winged-Maiar.

it#s set on a saddle within the river-valley of Sirnumen or Hiri and there's a small river-port down in the valley, though i like to think the Noldor used lifts or cables to get heavy materials to the top of the plateau rather than the winded, narrow track winding up the hill.
Last edited: Jan 29, 2017 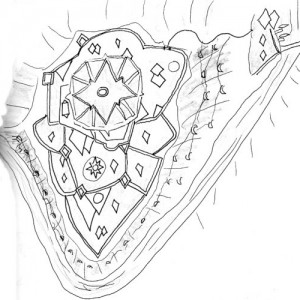 Alternate Version, this time with Diamond-Splinter Designs and Feanorian-Star.
Below Formenos is a Quarry and Mining Area. I like the Idea that there was an existing mining-colony before the Noldor chose to build Formenos here.

i'd really like to see a 3d version of formenos one day.

another question: i suppose the river hiri/kelusindi is navigable... though possibly not to the falls/caves beneath ezellohar where it runs underground. so while the river winds southwest through the plain of valinor... might there be a channel connecting it to the creek beneath tirion? the nildor certainly would be able to build such a thing...

Going back to an idea I had forever ago, and posted on the episode 11 thread, what do we think of having the walls, both interior and exterior, increasingly decorated with spears/axes/shields & swords? Both showing off the beauty of the Noldor crafts (as weapons can look quite elegant and beautiful) and the increasing martial nature of Feanor's camp. Also, Dave suggested that that the spear used to kill Finwe be Feanorian in origin, which seems so symbolically appropriate. But if we do that, Melkor would need to have it before he returns to Formenos, since he uses it to wound the Trees. But if he takes it off the wall while he's talking to Feanor in episode 11? On the thread, I envisioned it as Melkor getting more and more animated as he discusses the threat the Valar are to them both, and, in middle of the conversation, he takes one of them off the wall (I'm thinking he then turns, spear in hand, when he says "we should be in alliance, you and I!") The conversation deteriorates, and Feanor slams the door in his face, but he doesn't think to take the spear back. So, when Melkor vanishes, he takes the spear with him.

Staff member
Hmmm - why would anyone put weapons on the outside of their defensive walls, though? I can see displaying them in a hall, certainly, but outside the gate seems a bit much. We do need to get Melkor a Noldorin spear somehow, though, so....


I also keep forgetting to mention that the Telmarines in Narnia's Prince Caspian have some 8-pointed star motifs going on.

This extends to their architecture, which can be seen most clearly during the coronation scene, but I haven't got a screenshot of that.
Last edited: Feb 24, 2017

MithLuin said:
Hmmm - why would anyone put weapons on the outside of their defensive walls, though? I can see displaying them in a hall, certainly, but outside the gate seems a bit much. We do need to get Melkor a Noldorin spear somehow, though, so....
Click to expand...

I agree that at first glance it seems jarring. If Feanor was actually, 100% convinced that he was going to be attacked, he wouldn't. But if he's still just sending out huge, neon-lit "Do Not Mess With Me!" signs to the Valar and everyone else who makes eye contact, I could see it. And maybe not covering the outside wall, but as a display on the main gates? Perhaps even with an eight-point motif? Two spears making four points when crossed, a sword pointed upward, and a glaive or baton cutting across vertically?

Marielle said:
maybe not covering the outside wall, but as a display on the main gates? Perhaps even with an eight-point motif? Two spears making four points when crossed, a sword pointed upward, and a glaive or baton cutting across vertically?
Click to expand...

I suggested this off the cuff, but I think I really like it, actually. And then Melkor breaks the eight-pointed star by removing the spear... kind of symbolic of what he's going to do to Feanor and his seven sons, no? Though, of course, he's going to be responsible in some way for a lot more than two of their deaths.
You must log in or register to reply here.
Share:
Facebook Twitter Reddit Pinterest Tumblr WhatsApp Email Link
Top