Staff member
I'm trying to find inspirational pictures for the Calacirya. As I before, I tend to like scenery from Hawaii... Tha Cala...sorry, the Kalalau Valley... 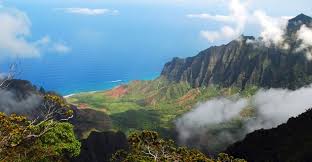 It seems to me like the area close to the sea fits well. We need the valley to go farther inland, of course, and we have to add the hill of Túna.

Staff member
After listening to and being a part of Corey's interview with Ted Nasmith I would propose throwing everything we already know about historical architecture away. I visualised what Tuna would look like and came up with a few revelations, particularly in regard to the light.
The only source of light (apart from dim starlight) is the two tress which will be fairly low to the horizon in the west. The elves love this light, so I don't think they would build much on the eastern side of the hill which would be in shadow, unless they wanted starlight. The houses would have to be open towards the west to capture as much light as they can. They would not need roofs to keep the heat of the sun out. The may need them to keep rain out though. Openness would be everything. Terraces and low buildings so as to not obstruct the light for the next tier up.
I am not particularly worried about what they could conceivably done at this time. Let's just say they had help from the valar (who when it came down to it formed the world) and make it beautiful but also unique for unique conditions.
Towers, yes, but everything has to capture the light. Maybe we have judicious use of mirrors; and street lamps like glass pools shining down that get filled with the liquid light of the trees (I know how difficult it is to see when you have light shining up from the ground, it just gets in your eyes and blinds you). Let's come up with some brilliant solutions for a truly unique city, the like which has never been built in Middle Earth then of after.

Well I know this is really cheesy but:
http://www.neuschwanstein.de/bilder/tourist/slider/neuschw.jpg

Haerangil said:
Well I know this is really cheesy but:
http://www.neuschwanstein.de/bilder/tourist/slider/neuschw.jpg

I do think that like Neuschwanstein, tall and thin is the way to go for Tirion.

Me too. I think that his Illustrationh "Tanaqui" (43) is an early imagination of Kor, what would later become Tirion...
http://img.photobucket.com/albums/v291/ISlitMyWristBand/tolkien tattoos/Tanaqui_zps25f35d32.png

I like the invocation of the Taj Mahal. Classic Arabic & Indian architectures have a lot of the right "feel" for Tirion, and Valinor in general. And it would certainly be a shame if everything in the SilmFilm Project ended up looking like Western Europe.

A first sketch for Tirion...

Note, it is built on Toona above a river which is going to flow into the Creek of Eldamar, there are at last three wells in Tirion runnung down into the River and there#s a small river-haven in the valley below and a slender bridge crosses the river eventually connecting Tirion to a road leading south to Taniquetil and west to Valmar.

The top of Tirion is more to the west while the eastern portion of the hill is flat
five more or lewss concentric circles climb up to the hill top, similar to minas Tirith
so far i chose the White tree is not in the highest but only in the second circle
while some streets of Tirion are densely built, the town as a whole is not, most buildings stand pretty free as i believe they are more cottages with gardens surrounding them than city buildings.
In contrast to Valmar also buildings are far smaller,
there are a few great towers, Mindon Eldaliéva being the tallest, but most buildings are of moderate size. There are at last eight or nine great open places, similar to Gondolin...

those would be places to locate within the city.

Staff member
Just a reminder that while next week's Session is focused on the Casting, the next Session after that will be focused on costumes/music/sets, so if anyone has any ideas for locations in Valinor, now is the time to share them! (I know the Season 2 forum doesn't work, so just post here in the Season 1 forum)

i'm still working on a map sketch for alqualonde... not sure if i can finish it in time...

Staff member
Well, if you can post what you have in time, that will be good, even if it's not finished. Assuming we get through all the casting next Friday, you have 3 weeks. But if we let casting spill into a 2nd Session, that's 5 weeks .

still haven't even reworked my irion and taniquetil maps...

but my "a normal day in valinor" sketches have some rough interiors...

Staff member
Honestly, whatever you put together is fine. I just know it's not fair to spring deadlines on artists, so I wanted to make sure folks were aware when we were planning to 'showcase' some of this stuff. You can obviously keep working on it after the session, but I wouldn't have wanted stuff to languish on your desk rather than make it here.