I've just started listening to the Silmfilm discussions and thought I'd just throw in a message here. I work as a visual effects producer and I was wondering if there are other people here interested in talking about or discussing VFX in a Silmfilm context?

I can see that there are a lot of forum posts about design and props, but I cannot help but to think about the enormous amount of VFX a project like this would need. As most fans have experienced the LOTR and the Hobbit trilogy differ a great deal in how visual effects, and the style of the movies themselves are affected by these choices. Consequently the choice of VFX also affects how we perceive the Secondary World we are trying to represent.

What style of effects would you want to see in a Silmarillion adaption? Should certain characters be retouched (say for example the Elves)? Would we want to create an effect for the "bright eyes" of the Elves? Is there any other similar topics that comes to mind?

I know that in the first episode it was stated that the project would have an "unlimited" budget, which in effect would mean the best vfx ever seen as budget and time (and clients changing their minds in the last minute) is what results in bad visual effects. So in order to actually discuss VFX in a project like this I'd like to imagine a scope similar to that of high end TV shows like Game of Thrones.

Again I've just started to listen to the project so I don't know if these topics has already been raised and discussed. Either way I'm still very interested in what you guys think.

Well, one of the topics we are discussing in Season 4 is the Spell of Bottomless Dread, our term for Morgoth and Sauron usurping control of Elves and using them to commit acts of espionage. The Hosts want some way of portraying this onscreen, also see this thread here.
https://forums.signumuniversity.org/index.php?threads/on-the-spell-of-bottomless-dread.3151/

What a fun topic to start. I can't speak for everyone, but I'm afraid that I will only really be able to talk in the broadest, most amateurish terms about the subject. I'm not sure where you are in listening to the show, and how far ahead you want to talk about stuff.

I think one of the more interesting effects early on in the show would be the visual difference between Caliquendi and Moriquendi, as you alluded you with "bright eyes". I don't know where to even start haha.

Another interesting effects-based question (does lighting count as VFX or is it its own thing?) would be what the lighting looks like in Middle Earth before the stars, and then after stars but before the rising of the Sun and Moon. Hard to have a show when it's always dark... I know we talked about the spreading "bloom" with the sun, with all those mostly dormant plants finally waking up in a wave of colourful flowers. On a similar vein, the lighting of the trees in Valinor. It can be really hard to depict "heaven" when we cut back and forth from heaven to earth....

I'm still in Season 1, but I don't mind questions relating to later stuff as I am quite familiar with the Silmarillion. And I started this discussion on the premise that there might not be that many here with experience/knowledge of visual effects and I was hoping to be able to help out and answer questions.

I think it would be a great idea to create some form of visual representation of Calaquendi vs Moriquendi as this is a point of conflict in the beginning of the book. It would also be a way to highlight why the returning Noldor was such a big deal and posed a threat to the way of life for the Sindar (at least according to Thingol). It would also help in highlighting the importance of certain characters of note.

In regards to the lighting before the creation of the sun, I would say its a "colour-grade" thing. That is, I would guess that the contrast and brightness of the film stays the same, while the overall colour is changed. The lighting in Lothlorien is a great example of this. So something like that would be quite easy to do.
F

Visual effects have a huge impact on any show or movie, of course. I myself am utterly clueless about how these things work.


Tolkien's stories are generally light on the kind of visual descriptions that I as a reader often look for -- character coloration, clothes, landscape details. But he mentions many evocative details that are hard to imagine in concrete terms. Elves are more beautiful, and have more clear and musical voices, than any Mortal. They have "bright" eyes but that doesn't seem to mean glowing eyes like the WOW elves. Several characters (like Luthien, Feanor, and Varda) are said to be the most beautiful being ever seen. The radiance of the Trees and Silmarils is described in ways that don't translate into clear visual effects, at least to my mind. Morgoth's eyes are terrible and menacing in unspecific ways.

The darkness of Middle-earth under the stars would realistically be too dark for us Mortals to see anything, so the suggestion has been that it would be "movie darkness" with enough blue-washed light to see things on the screen.


I can come up with a few concrete suggestions:

The Valar and Maiar are going to have both humanoid forms (very Elf-like, and wearing beautiful clothing-like covering) and "elemental" forms. The latter are still human-shaped with mostly human faces so they have relateable expressions, but turned into elemental like figures. My out-there suggestion was that we show how these forms are mere "raiment" for the Ainur, by changing each Ainu's costume every episode, or even every scene, depending on their mood and role in the episode or scene. Even cooler would be to show subtle shifts in their outfit/form during each scene, an accompaniment of their facial expressions and body language.

Elves and Ainur could be touched up to remove any tiny skin blemishes, without removing all texture or pores.

Calaquendi and Melian would have some kind of "light" around them, in their faces and falling about their feet. Basically, take the description of Gildor's company and of Galadriel in the LotR, and somehow turn that into a visual effect on screen.

Some kind of visual effect when people use songs of power. At one point I described in detail my suggestion for what the Girdle of Melian could look like as Melian sings it into being. Sorry that I can't recall where I posted that, or I would give you a link.

Staff member
Any thoughts you might have on depicting Maedhros hanging from the cliff or as an amputee later would be appreciated!

MithLuin said:
Any thoughts you might have on depicting Maedhros hanging from the cliff or as an amputee later would be appreciated!

Maybe you have a carved wooden leg (complete with foot) for someone who has an amputated leg, ie Mad-Eye Moody’s depiction in the Harry Potter books (the films have a metal artificial leg which ends in a boot).

Staff member
Will we have any characters with amputated feet? Sador Labadal is lame, but I don't think he's going to have a prosthetic... And I don't think Brandir the Lame is missing a foot, he just walks with a limp.

MithLuin said:
Will we have any characters with amputated feet? Sador Labadal is lame, but I don't think he's missing a foot or anything.
Click to expand...

No characters, but maybe an extra? I don’t think we have anybody who has a prosthetic (apart from Azog in The Hobbit films), since neither Gwindor nor Beren receive prosthetic hands for instance (Ted Nasmith messed up again I’m afraid, since Gwindor still has a full set of hands). 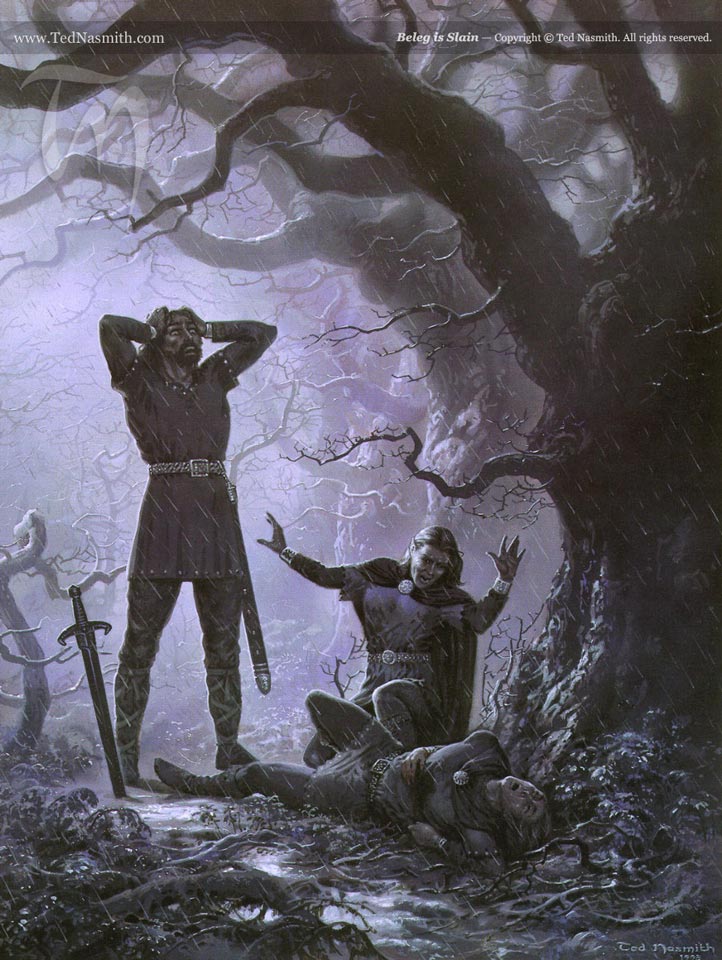 Ange1e4e5 said:
No characters, but maybe an extra? I don’t think we have anybody who has a prosthetic (apart from Azog in The Hobbit films), since neither Gwindor nor Beren receive prosthetic hands for instance (Ted Nasmith messed up again I’m afraid, since Gwindor still has a full set of hands).

No, i guess some men or orcs could have good old wooden legs and eye patches if necessary to show there are severely wounded people in the wars... but i thonk those prosthetics would be quite primitive.
You must log in or register to reply here.
Share:
Facebook Twitter Reddit Pinterest Tumblr WhatsApp Email Link
Top