In response to the Host's challenge in Episode 0-2 : How to visually depict the Valar

Did an after and before pic, changed the color scheme a little. Left the reference picture in as well. I believe she was the one who won the nomination

Really, really nice. It is a good idea to have the Valar be depicted like that.

Staff member
Wonderful! I agree, it's really nice to get a picture of what Nienna could look like based on Cotillard.

Anastasia said:
Hello again,
I couldn't decide whether to edit my previous post or make a new one, but since I am uploading an image, I thought a new one would be best. I have drawn a rough costume sketch of Bre's Nienna (Post elf-contact)

What do you think of my interpretation of your artwork Bre? I changed the shape of the sleeves, since I thought a bell sleeve would evoke a teardrop, does that work for you?

My only concern with this costume is one of practicality. I am worried about the veil impeding the audience's view of the actor's face, and thus impeding the performance. We have to keep a hood or veil, since that is literally the only physical costume item that Tolkien describes her having, but I'm not entirely sure how to make it work. There are indeed very transparent fabrics in the world, but I haven't seen any that would not obscure the actor's performance in some way. Bre's drawing has a slit in the front of the veil, which will be helpful, since the set costumers will have the option of pinning back the veil to allow the camera to see her face, while keeping this key piece of costuming on her head. But does pinning back the veil, or uncovering her face in some way defeat the purpose of having a veil at all? I'm having trouble visualizing the logistics of it.
Click to expand...

Soooo...I am setting as one of my costume goals this coming year to work on this version of Nienna. Obviously, I would be making the outfit for me, not someone who looks like the actress we cast in the role, but I think it would be really great to have the opportunity to play with some fabrics and work out what it would look like.

So, before I do that...is there any objection to my using your designs, Bre and Anastasia? Obviously, if anyone asks me where it's from, I'll tell them, but there's a good chance that if I make the costume there will be photos floating around the internet without any attribution. (Because I would intend to wear it to DragonCon next year with a group of the Valar, so...if that happens...strangers will take photos not knowing who we are).

I should add the caveat that it wouldn't be a faithful reproduction, more 'inspired by.' I definitely want to do the headwrap+veil, but there will likely be some limitations in how well I can do the rest of it. Like, chiffon is lovely, but I've never sewn with it before, and, well..... Also, I might be adding 'teardrop' trim as decoration. Stuff like that. We'll see. Just an idea right now, but one I'm pretty excited about!

I'm fine with it. Just add "inspired by" with credit if you do a photo post of it online or something like that
F

I had a (possibly crazy) thought about the Ainur. To snow that their fanar shapes are raiment, artistic expressions of themselves and veils upon their true (invisible??) glory.

Instead of having just one "elemental" costume and one human/elven costume, for each Ainu... what if we had several of each? Imagine Manwe has several "elemental" fanar and several clothing outfits for his elven fana. All of them fit his visual themes and convey something about his character. But which he's wearing changes from episode to episode, in keeping with something about his role in that episode or its theme. Or even wilder, what if it changed from scene to scene, based on each Ainu's mood? In addition to CGI creating slight changes as his emotions shift within a scene (like Morgan Z's suggestion).

Now imagine that for all the Valar and Maiar, for Mairon/Sauron, and for early Melkor too. Really convey how temporary these shapes are, and how each reveals only a little about the Ainu inside it.

This would probably be craaaazy to do with a real TV series, but we'll never film it, so we don't have to care about practicality. Not to demand extra costumes from the artists, but to say Go wild, draw as many different costumes as you want. Each artist has their own ideas for how to convey each Ainu... why choose when we could use them all?
Last edited: Jan 25, 2019

Staff member
Nienna costume is a go! I have been gathering materials for it, and intend to get started this week. I am doing a two-part veil, with the headwrap and sheer veil over it. I have organza and chiffon for the veils and the sleeves, so plenty of sheer nonsense going on . For the band/crown holding the veils in place, I want to try something made of leather and stained glass....not sure that's going to turn out at all, so I may completely rethink that. I also have some dupoini silk for the skirts/bodice and an overlay for the weird teardrop shape over the chest.

Unfortunately, I can't see the sketch Anastasia made any more, as the media gallery seems to be acting up on here. Definitely should have downloaded that!

Yeah all the old uploads are gone with the new forum version...

Here's my first iteration of Nienna. I tried a lace veil, but I probably will switch to chiffon and put the split in it.

For the head piece, I used metal beads and green labradorite stones. I may share some detail shots later.

I am wearing 3" heels, so I am the same height as the actress we cast in this role, and I do have brown hair/blue eyes. None of my other measurements match, though
Last edited: Sep 3, 2019

Staff member
So here are some photos taken of our group that were not blurry selfies in a mirror....

These group shots by Chris and Nadine:

The Valar...aka, yards upon yards of chiffon and endless beads!

All photos below credited to Nathaniel Dukes. Album may be viewed here: https://natedukes.smugmug.com/Bree2019/
Photos were taken at Evening At Bree at DragonCon 2019 in Atlanta, GA on Friday August 30th. Unless otherwise noted, everyone designed and made their own costumes/makeup. 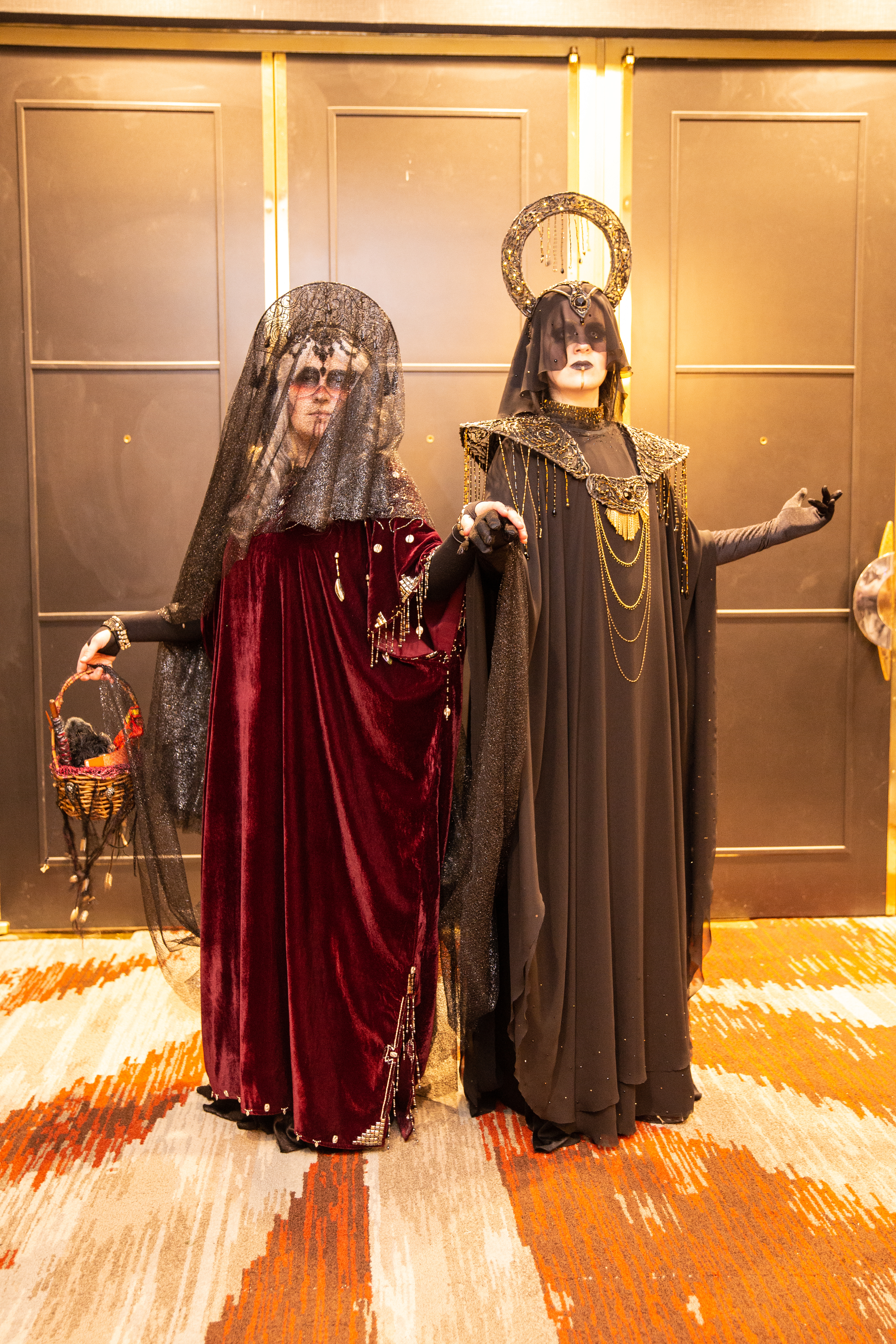 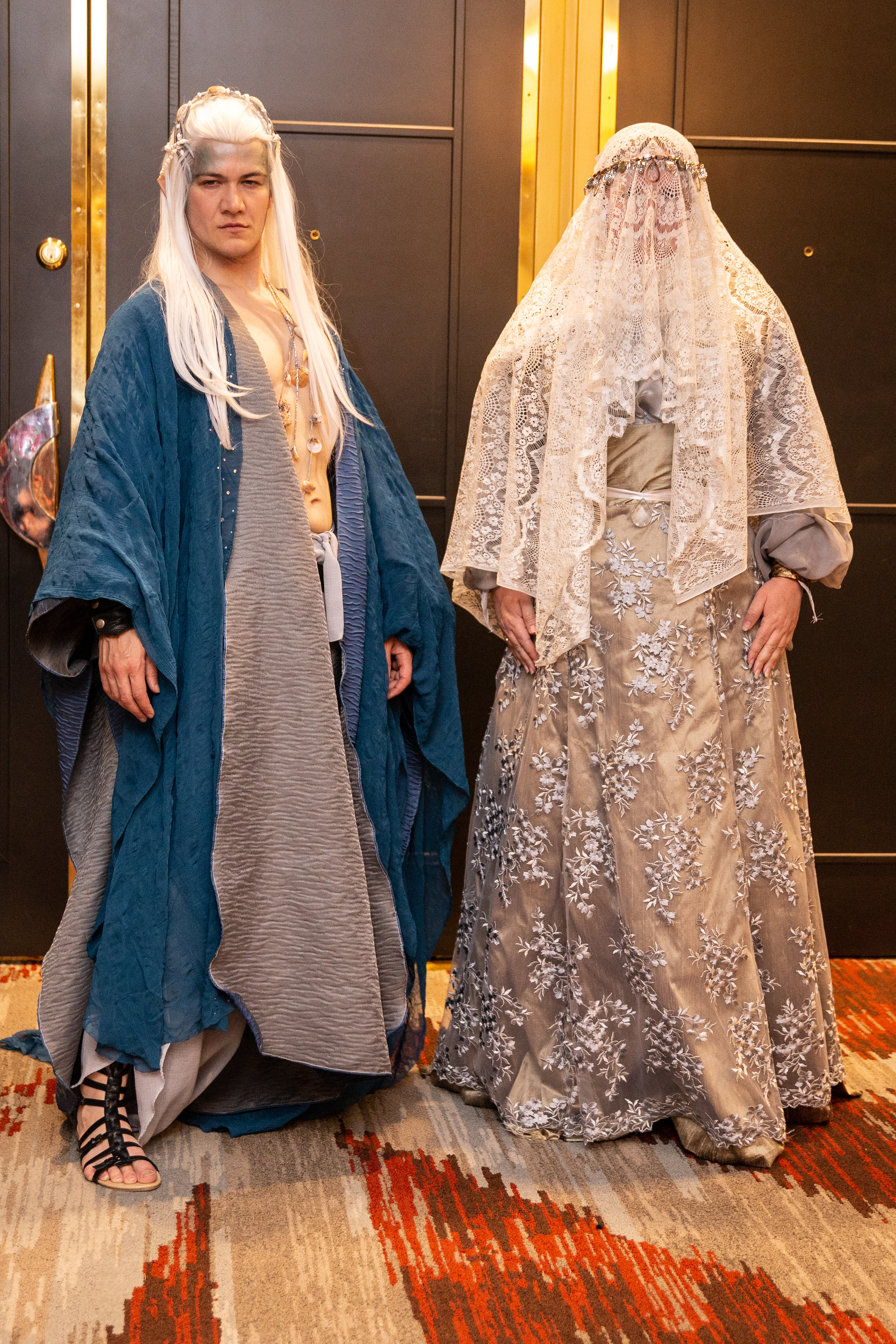 Ulmo: Nax* (crowd-sourced costume made by Kathleen, Celia, and Kelly)
Nienna: Me!!!! Thanks to Bre Melvin for inspiration for the costume design 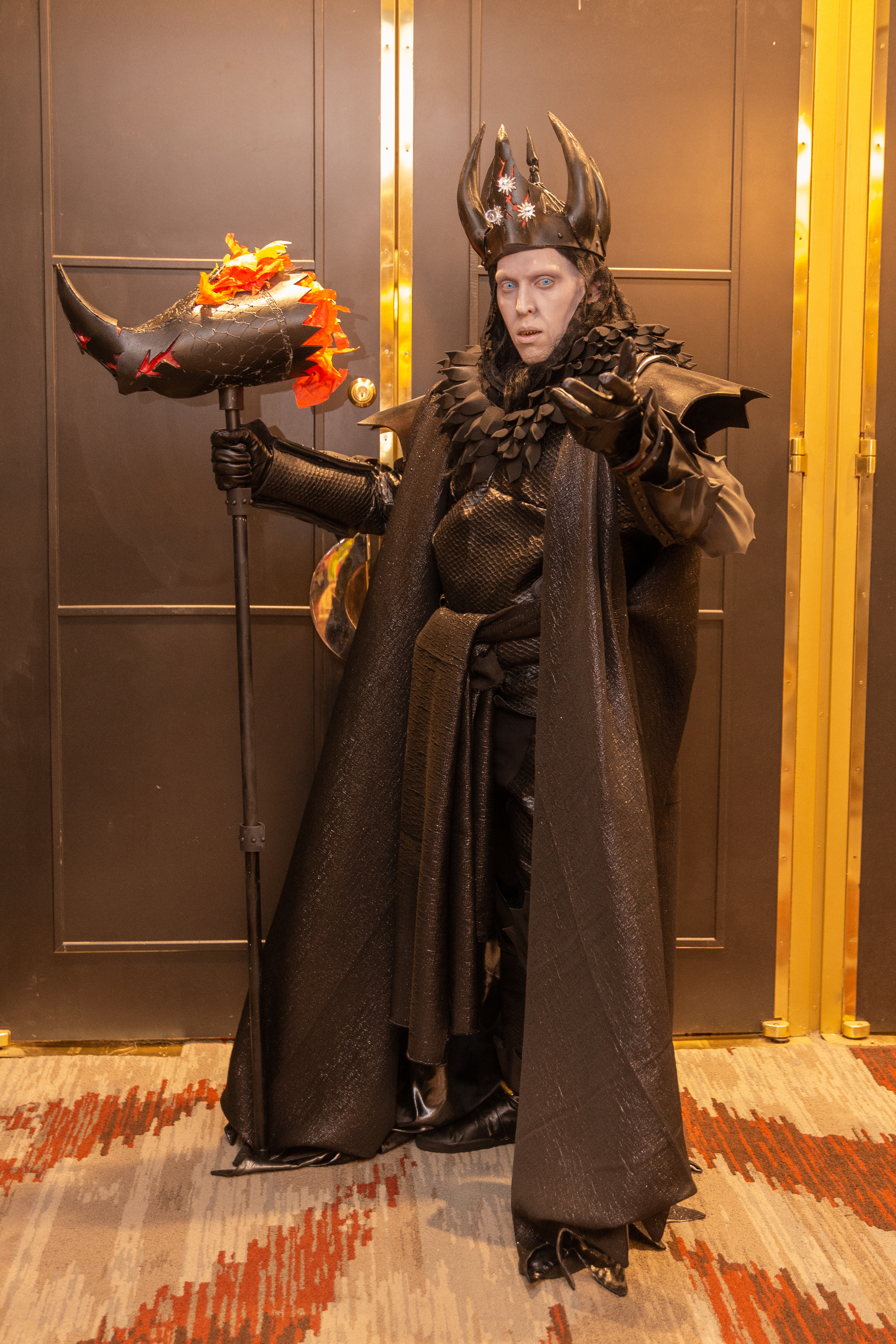 MithLuin said:
So here are some photos taken of our group that were not blurry selfies in a mirror....

These group shots by Chris and Nadine:

The Valar...aka, yards upon yards of chiffon and endless beads!

All photos below credited to Nathaniel Dukes. Album may be viewed here: https://natedukes.smugmug.com/Bree2019/
Photos were taken at Evening At Bree at DragonCon 2019 in Atlanta, GA on Friday August 30th. Unless otherwise noted, everyone designed and made their own costumes/makeup.

Ulmo: Nax* (crowd-sourced costume made by Kathleen, Celia, and Kelly)
Nienna: Me!!!! Thanks to Bre Melvin for inspiration for the costume design

Then we can tick this off our to-do list.

I like vaire and mandos best to be honest... Melkor is also cool in a way...

Staff member
It was a lot of fun! In one way, it was just amazing that we were able to get all 15 of us together in one place to take this photo. There's 2 Canadians and 1 European in the group, and only a few 'natives' of Atlanta (though Oromë and Vana are married in real life, so there's that!) There turned out to be a lot of accidental coordination between the spouse/sibling pairs, so it was cool to see how everyone else interpreted their characters. Ulmo's costume was 'crowdsourced', which meant people who live in different places made pieces of it, and then when Nax arrived, he was simply attacked with shells and voila.

I realize that my 'recreation' only looks a little bit like your artwork, but I did put copper on the cuffs, headpiece, and belt (not shown!), and tried to keep the 'veiled' motif throughout. The only part I copied exactly was the sleeve detail - there is a solid panel with an open teardrop at the top coming down to a point underneath, with a chiffon bell oversleeve gathered at the cuff. And I tried to keep your pleated/gathered look in the cutout on the chest, which you can't see because of the veils, of course!

We plan to do this again next year in a different venue (so with maybe some characters swapped out), and if so I'll wear the 'right' veils and belt next time, and maybe improve the neckline so I can trim the veils to reveal a bit more (slicing down the face as in your artwork for the chiffon layer, at least, and with lace on the back only.) and I will likely improve the cuffs and belt a bit, but we'll see.

One 'level up' for me with this costume was actually sewing chiffon into particular shapes (to make the sleeves) and beading (which I didn't really do, but will say I sorta attempted , at least....well, there are some beads, anyway!) I think the part I am most pleased with is the effect of the overlay on the skirt, and the choice of floor length hemming (which I will really regret when I have to wear those 3" heels to walk on gravel/soft ground next year!)
You must log in or register to reply here.
Share:
Facebook Twitter Reddit Pinterest Tumblr WhatsApp Email Link
Top