Yes there were many breeds, but from the orc who is called "huge" being almost human-sized I think it's clear that by the end of the Third Age, their stature had degenerated overall. The Uruk-Hai were bigger because they had been bred recently with humans.

Not in the First Age, though! I don't know if it even makes sense for there to be different breeds, other than "actual orc" and "demon disguised as an orc".

When we started talking about orcs i had the vague idea that in some way ALL theories jrrt gives us in pome are true to a degree... Some orcs are mere soulless beasts, some are soulless " robots" who can't exist without morgoth's will , some are maia demons and some are well... Tortured elves ( and men as soon as morgoth knows about them and begins to abduct them for experiments).

So finrod & company found a troop of orcs large enough to imitate them and take their clothes... Yet there still could have been smaller varieties in the first age too ... I think there are quotes strongly indicating this.

Actually i'd like to see five or six varieties of orc in our series...

- beastly orcs: small, soulless, not very intelligent but useful as slaves
- soulless war- orcs: taller and effective war- machines, but not intelligent and inferior to high- elf warriors. All they can do is obey/ react.
- boldogs: huge and intimidating ogres. But since these are in fact lesser demons there are not great numbers of them instead they appear as generals and captains.
- broken elves/ kaukareldar: i guess these would be as big as normal elves, but maybe a bit bent and not too healthy looking. I guess there also won't be a too great number of them.
- man- orcs: shorter than broken elves and more brawny and squat. They are strong and multiply fast and make good grunts. These would later make the greatest part of tje irc population as they can multiply like mortals.
- orcs trained to fight in the forests: maybe a sub- group of the man- orcs. Smaller and frankly i'd like to link them with the druedain.the dru- orc connection mentioned in unfinished tales is something i definitely would wish to use wirhin the series.


As the elves at first mistook the orcs for savaged avari when they first met them, and probably killed the first dwarves they encountered because they mistook them for orcs i guess our orcs do not look that different from wild elves/ dwarves despite their cat eyes, cat- ears, matted hair, fangs, and squat built.
Last edited: Sep 15, 2017
F

I don't think they have literal cat ears like anime cat-girls -- I think that's a metaphor/simile for having cat-like hearing. Unless that's a specific trait only of the beast-orcs and/or demon-orcs/boldogs.

Also I think that when Morgoth captured Men and Druedain and bred them with orcs, he bred them right into the elf-descended orcs. So I would combine those three types. Actually I think that as soon as the transition is made from elf to Morgoth-worshipping orc, the lifespan and rate of reproduction change in a single generation.

The Unfinished Tales mentions orcs trained to fight in the forests, but not bred specifically for it, so I wouldn't make them a separate breed.

Faelivrin said:
Also I think that when Morgoth captured Men and Druedain and bred them with orcs, he bred them right into the elf-descended orcs. So I would combine those three types. Actually I think that as soon as the transition is made from elf to Morgoth-worshipping orc, the lifespan and rate of reproduction change in a single generation.
Click to expand...

Drawing a blank... when did this happen? I thought merging orc and man was Saruman's innovation, not a repeat of something Morgoth had already done.
F

Tolkien went back and forth over whether orcs were bred from Elves or from Men or even from animals, but they can't be from Men alone in the flat world version -- Men didn't awaken early enough to be the sole source. And they can't be from animals, because then Saruman can't breed them with Men. So my interpretation is that Men were mixed into the existing orcs, which had initially come entirely from Elves.

The orcs in the late Third Age, after 7000+ years of further degeneration, were smaller and less impressive than the earlier First Age orcs, motivating Saruman to do the crossbreeding thing again.

Yes that cat- ear thing wasn't meant literally, also agreeing about breeding man- orcs into the elf- orc bloodline from the start and about the diminishing/ degeneration of orcs rhrough the times, even the first half/ elf/ man orc generation should already be smaller rhan the first elf orcs/ kaukareldar types.

I still think the druedain could descend from refugees from morgorh, men he tries to corrupt but failed. Both orcs and druedain saw each other as traitors..
Last edited: Sep 15, 2017
F

Haerangil said:
I still think the druedain could descend from refugees from morgorh, men he tries to corrupt but failed. Borh orcs and druedain saw each other as traitors..
Click to expand...

Agreed. Tolkien seemed to leave it ambiguous whether man-orcs were bred from Druedain, or if Druedain were descendants of the first generation of slave-Men/orcs who escaped. They hated Morgoth and the Orcs like nothing else.
Last edited: Oct 19, 2017

it´s funny... while i was googling for renaissance military I found these pics...
these guys look much how i would imagine orcs to look like... 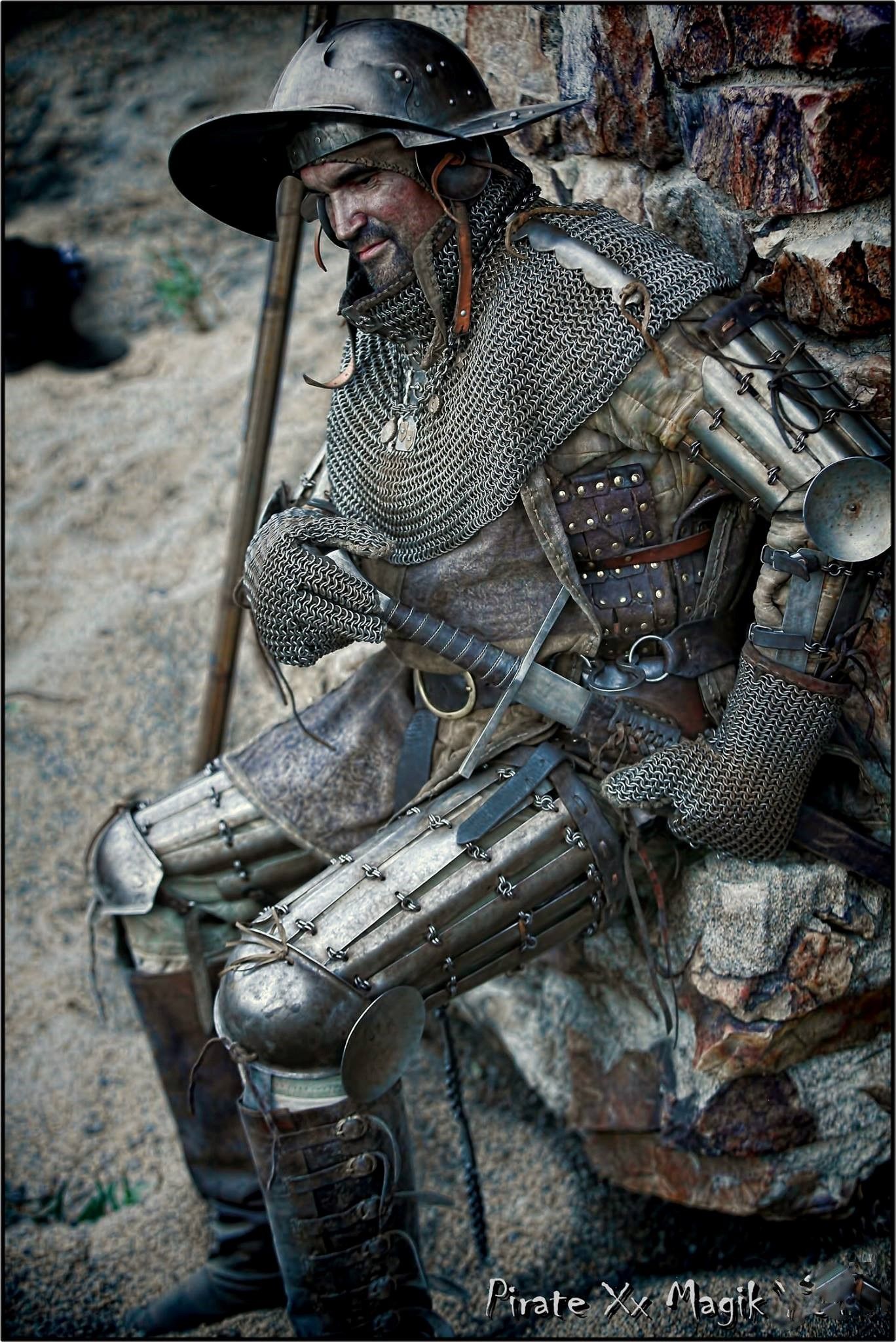 had some time for sketching orcs again...

I chose him to wear one of those bulky helmets with broad rim, but small enough to fit under his hood, also figured out he shoud wear warm clothes as to the cold of Anfauglith. No chainmail yet, instead sort of scale and splint Armour and sort of vambraces and Greaves... still not sure what to do about their iroclad boots... I had a look on what Landsknechts were wearing... something fit for heavy infantry rather than Knights.

Well, so far we have the Boldogs, Dogs, gongs and kaukareldar...


This season we will introduce our first Man-orcs and Dru-orcs.

Do you have any thoughts on them?

I suggest they are smaller, more manlike than the beastly gongs and stoic-robot-like dogs, more able to have some individuality, to operate more self-realiant, more disciplined than the gongs, but more fearful and generally more emotion-driven than the dogs.
F

Er... where do I go to read what Dogs and gongs are, again?

Sorry! I mean beastly-orcs and soulless-soldier-orcs.or "Goblins" and ... dunno,
F

Wouldn't the soulless Orcs and animal-based Orcs be the same things?

Let me see if I have it right.

Yes, so or more less..., while i still maintain that dogs also might be pure constructs, moved by morgoths will. I imagine beastly orcs or goblins and constructs to look and behave very different. Indeed i thi k of beastly-orcs as behaving more like tortured or frenzied animals, while i think of constructs more of emotionless and cold, possibly also slow and very synchonous.
F

Constructs would just be very small Trolls. Why not take a little extra effort to make them bigger?

Then again, I was reflecting the other day that it seems a waste to make Trolls so humanoid. Yes, they're mockeries of Ents. But why not make them all 2-headed, 4-armed, long-clawed monstrosities with eyes in the back of their head(s)? Is there some worth to making it possible for the ignorant and nearsighted to mistake them for Ents?

I think there definitely should be room for two types of constructs and much in between. possibly constructs just work better as Tanks than as infantry, so they get replaced after a while... though i think soom there will be things that are something in-between, like one quote said, Melkor mixed greater orcs and smaller trolls and maybe we get something vaguely orcish-intelligent in a more giantish humanoid body like the later stonetrolls, which might be "stone effigies filled with goblin.-spirit". But maybe we need a threat of its own just for trolls?
F

I’m not sure if you mean cross-breeding Trolls with Orcs. I don’t think different species can be crossed that way, except Ainur can breed with anything if they want.

Did we depict Trolls as an attempt to improve on Orcs? If we did then it makes sense for them to be stronger and/or tougher than Orcs, even when not bigger.